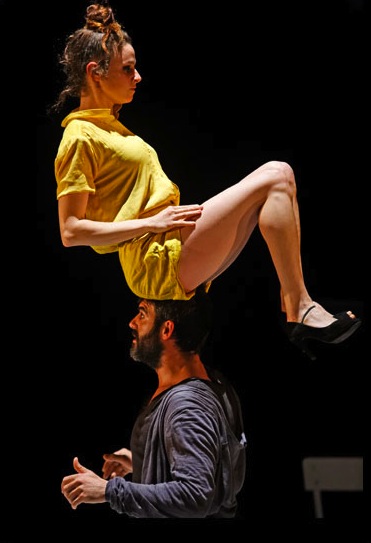 The London International Mime Festival, an annual celebration of contemporary visual theatre, will return in January 2014 for its 38th year. The festival will feature some interesting performances integrating dance, including France’s Compagnie Non Nova, which will open this year’s festival, as well as Mathurin Bolze’s A Bas Bruit and Gecko’s Missing at the Royal Opera House.

Running from Wednesday, January 8 to Saturday, February 1, the festival will present award-winning new work from the Czech Republic, France, Holland, Italy and the UK at the Barbican and Southbank Centre.

Opening the festival, France’s Compagnie Non Nova will be at The Platform Theatre with two productions, first L’Après Midi d’Un Foehn and then Vortex. L’Après Midi d’Un Foehn is a shorter version of the company’s show that won a Total Theatre Award and a swathe of rave reviews and fans at this year’s Edinburgh Fringe. It’s darker companion piece, Vortex, is a solo tour-de-force for the show’s creator, Phia Menard.

L’Après Midi d’Un Foehn, set to be a London premiere, has been called “miraculous.” Borne aloft on currents of air, small plastic bags become dancers in an enchanting, performance-art ballet, set to the music of Debussy. Performances, only 40 minutes long, will run Wednesday-Saturday, January 8-11.

At the same time as these performances, Compagnie MPTA, also of France, will present the UK Premiere of Mathurin Bolze’s A Bas Bruit. Set for Thursday–Saturday, January 9-11, the show is inspired by the work of French New Wave filmmaker and anthropologist Jean Rouch. A Bas Bruit explores what happens when feelings and ideas rebel against the established order of things. Video, dance and circus come together on this epic journey filled with unpredictable encounters.

Beginning soon thereafter, Amit Lahav’s dynamic, physical dance-theatre company, Gecko, will present Missing, a work that opens up a delicious world of warped imagery, beautiful music, stunning design and unusual choreography. To be performed Friday, January 31 and Saturday, February 1, Missing is a thrillingly staged exploration of the human psyche, and an astonishing piece of visual storytelling.

In addition, on Thursday, January 30 to Saturday, February 1, Aurélien Bory’s What’s Become of You? will explore the lure of flamenco. Created for Stéphanie Fuster, the choreography will capture the familiar heat and passion of the dance form as a personal story unfolds.

Then, bringing circus into the mix, the production Fet a Mà will showcase Catalan performers Marta Torrents and Pau Portabella, who trained at France’s Lido School of Circus Arts and created their company in 2008. The performance will use circus as a way of describing and sharing intense emotions – circus as Samuel Becket might perhaps have imagined it. Based in a fusion of theatre, dance and acrobatics, its work involves no equipment, props or other artifice, only the body. What results is raw and real, and audiences can catch it Monday-Wednesday, January 20-22.

Finally, in the same space as Fet a Mà and starting after its close, Spitfire Company from Czech Republic will present the London premiere of One Step Before the Fall. Here, in the tight confines of a boxing ring, Veronika Kotliková’s impassioned, power dance converges with a mesmerising wave of voice and sound from Czech Grammy winner Lenka Dusilová in a single, unforgettable moment.

From one of the Czech Republic’s most exciting and dynamic young companies, One Step Before The Fall is an impressionistic vision of triumph and loss, physical combat and exhaustion, inspired by Muhammad Ali’s most challenging fight – his battle with Parkinson’s disease. A Total Theatre Award nominee and Herald Angel winner at the 2013 Fringe, this work will blow you away.