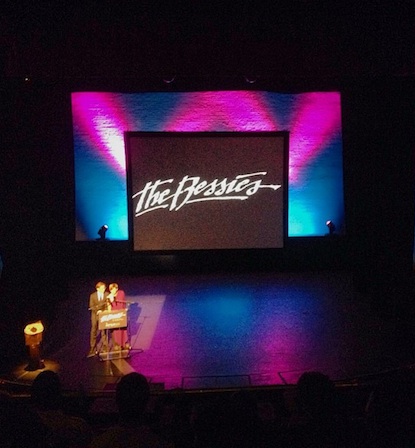 Other performances included an excerpt of 2013 Outstanding Emerging Choreographer Joanna Kotze’s It has happened it was happening it will be happening and 2013 Juried Bessie Award winner Darrell Jones’ Torchsong #1. The second company of Paul Taylor, Taylor 2, performed 3 Epitaphs.

The 14 award recipients announced at the Apollo are as follows:

– Also for Outstanding Production: Joanna Haigood’s Paseo at Dancing in the Streets and Casita Maria Center for Arts, for “taking the audience on a celebratory passage through Bronx cultural life” set to the Latin beats that originated in these neighborhoods.

– Also for Outstanding Production: Zach Morris, Tom Pearson and Jennine Willett’s Then She Fell for Third Rail Projects at Arts@Rennaissance and Kingsland Ward at St. Johns, for “using dance and fractured text to create a dreamscape as compelling and disorienting as Alice in Wonderland’s original journey.”

– Also for Outstanding Production: Liz Santoro’s Watch It at Museum of Arts and Design, for “blurring art and life” by placing the audience in a space from which they viewed New York street life, choreography by chance and choice.

– Outstanding Revival: Bill T. Jones’ D-Man in the Waters for the Bill T. Jones/Arnie Zane Dance Company at the Joyce Theater, for returning to a work of “great joy born of a time of great loss” and bringing its “fierce fight for life” to a new generation.

– Outstanding Performance: Sebastien Ramirez and Honji Wang in their duet AP15 at the Breakin’ Convention at the Apollo Theater. This electric duet, rooted in hip-hop, explored the space between the lover and the loved with “delicacy, passion and agility.”

– Also for Outstanding Performance: Jaro Vinarsky in Pavel Palissimo’s Bastard at La MaMa Moves! Dance Festival. A coiled bolt of energy capable of captivating stillness and explosive physicality, he made every moment harrowing, sharp and urgent.

– Also for Outstanding Performance: Herman Cornejo of American Ballet Theatre. He “combines an astonishing technical ability with an unaffected purity of movement” in the works of choreographers Alexei Ratmansky, Mark Morris and Twyla Tharp.

– Also for Outstanding Performance: Shantala Shivalingappa for her Shiva Ganga, for embodying the god Shiva and the spirit of the River Ganges in one riveting performance, a vibrant athletic battle of life force.

– Outstanding Sound Design: Ant Hampton and Tim Etchells for The Quiet Volume at Performance Space 122 and PEN World Voices Festival, for their use of “intimately whispered text” in a work in libraries across the city and for a score which “heightened the experience” in a space at once public and private.

– Outstanding Visual Design: Fleur Elise Noble for her 2 Dimensional Life of Her at Under the Radar Festival at the Public Theater. She used detailed projections on simple paper cutouts to create a complex, playful, visually-compelling world.

Photo: The 29th Annual Bessie Awards at the legendary Apollo Theater on Monday, October 7. Photo courtesy of The New York Dance and Performance Awards (The Bessies).