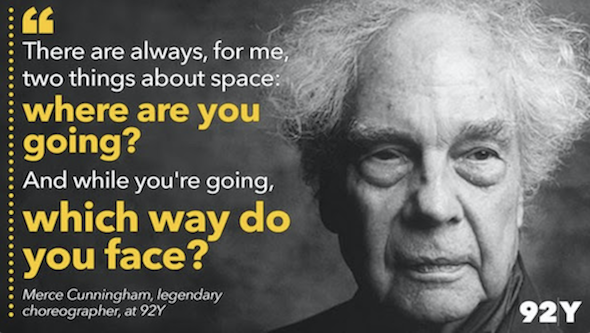 “We’re an organization that both honors the past and looks forward, and that’s the unique stamp we’re bringing to the Merce Cunningham Centennial in our own anniversary year,” notes 92Y Harkness Dance Center Director John-Mario Sevilla. “Merce’s legacy lives on in his own groundbreaking choreography – which is now an important part of the dance canon – and in the choreographers he inspired, whose work continues to innovate.”

Merce Cunningham had a long history with 92Y. He appeared there 11 times, beginning with his first performances in 1943 as a dancer with Martha Graham and Company. He also participated in literary events and lectures, including his final 92Y appearance in 1994 in conversation with Deborah Jowitt as part of the “Breaking Ground” lecture series that also included such guests as Erick Hawkins, Judith Jamison, Twyla Tharp, Mark Morris, Bill T. Jones and Jerome Robbins.

HDF has been a diverse, ever-evolving festival presenting a wide range of genres and formats over the years, and always with a curatorial eye focused on dance’s legacy artists (The Limón Dance Company, Martha Graham Company, The Erick Hawkins Dance Company), of-the-moment works (Pilobolus, Urban Bush Women, Molissa Fenley) and future forward choreographers (Kyle Abraham/Abraham.In.Motion, Jessica Lang, John Heginbotham). What has remained constant is a commitment to support dancers at various stages of their careers and provide performance opportunities under the banner of the 92nd Street Y – one of modern dance’s most celebrated and historic homes.

For more information and a full festival schedule, visit www.92Y.org.