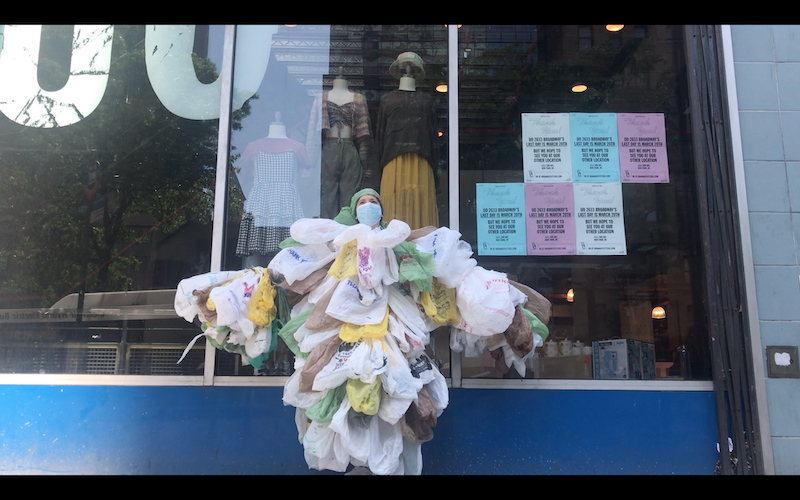 Jody Sperling’s dance film “Single Use” is an official selection of the 2021 Harlem International Film Festival, with screenings May 6-9, 2021. The opening night screening on Thursday, May 6 at 5:50pm will be an in-person red carpet event featuring an audience Q&A at the AMC Magic Johnson Harlem 9 Theaters (2309 Frederick Douglass Blvd). Following the premiere, “Single Use” will be available for virtual screenings Friday, May 7 through Sunday, May 9, 2021.

Sharing an environmental theme, “Single Use” is a kinetic response to the problem of plastic pollution. The Covid-era film shows Sperling donning an outfit fashioned from over 150 reclaimed plastic bags to romp and roll down a normally bustling stretch of Broadway, here eerily free of traffic due to the pandemic. Skittering and careening across the asphalt, she transforms into blossoming organic forms. Demonstrating the beauty of that—and who—our society throws away, the piece offers a meditation on the nature of disposability and resuscitation. The film’s subtle score is by environmental composer Matthew Burtner.

“Single Use” will be featured in a program with the North American premiere of Anne Via McCollough’s Full Circle, a documentary celebrating Helen Hays’ Great Gull Island Project, a 50-year quest to save two species of threatened seabirds.

Due to Covid precautions, the seating-capacity for the festival’s in-person screenings was reduced to only 50 live attendees. To accommodate viewing demand, the festival’s live-screened films will be available for online viewing after the premiere date.

For more information or to purchase tickets, visit the Harlem Film Festival website.