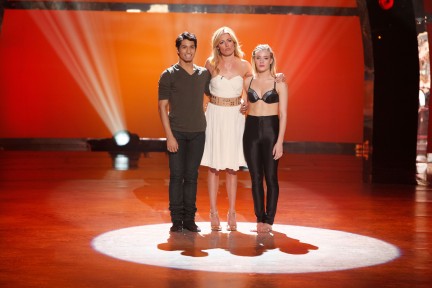 Ryan and Alexander just missed out on making it to the Top 10 on this season of So You Think You Can Dance. After their eliminations the two spoke about their time on the show.

Ryan, Nigel said you seemed “down and out” on the results show.  Was that true?

When he said that I was not surprised, but I definitely didn’t feel that way at all. When I got the comments on Wednesday about the duets I thought that I might be in the bottom, but I never was “down and out” about the competition. I was still fighting, and I still thought that I had a chance to stay. I was excited to do my solo so I could dance on the stage again. I never felt down or out.

Alexander, it seemed as though you were compared to your dance partner Sasha a lot this season, instead of being critiqued as a couple. Did it feel like that to you?

I feel like they kind of forgot that being a couple is about team work. Every single week Sasha and I worked extremely hard.  During rehearsals nobody ever said, “you know, so and so is better or is this”.  It was just basically only when we went live that I started to get those comments.  So it was really confusing, because you hear one thing during the rehearsals and during the dress run, and then when the show aired it’s something completely different.  But it is what it is and sometimes you just have to make the best of it.

Ryan, after not making the top 20 last year, you came back strong and showed the judges that you were worthy of a spot.  Was your experience everything that you thought it would be?

YES!  It was everything I thought it would be and more.  It was amazing. Relating to the choreographers was just as great as I thought it would be.  I would say that it was better actually.  And the other contestants were very inspiring. I didn’t know that I would learn so much about myself through the experience.  It really pushed me to my limits physically and mentally. You go through so much critique, no sleep and then have to learn so much choreography. I think I realized that I can push myself more than I thought I could.

Who’s your dream choreographer to work with?

Alexander
I really enjoy working with Tyce.  He’s a big inspiration.  Jamie King is one of my other all-time favorite choreographers.

Is there a dance style you haven’t learned yet that you would like to learn still?

What about this competition did you find most difficult or most surprising?

Alexander
I think the hardest part of the competition is having to perform your pieces live on television and getting critiqued and judged on television.  It is a popularity contest as well as a dance competition.  Yes it’s very entertaining, but people at home will simply not vote for you because they don’t like your costume or because you said something in the package that they didn’t like. So I think that’s the hardest part.  You have to just keep remembering how much you love dance, why you keep doing it and that it is a chance to perform on one of the biggest stages any dancer can perform on – the So You Think You Can Dance TV show.

Ryan
I think the hardest thing was just being in the public eye so much.  I didn’t realize how much people really analyze your every move on the show. You have to keep your mind focused on why you’re there and not get caught up in what people are saying about you. You have to keep a level head and just do it because you love dance and want to grow as a dancer.

Ryan, since you’ve already worked with Mia Michaels and you’ve assisted on some other seasons, do you plan to pursue choreography?

Yes.  Becoming a choreographer is one of my main goals in life.  I still want to be a performer because I love performing and being on stage.  I think right now I want to continue performing while also developing my skills as a choreographer, and then hopefully, as I get older and I’m not able to perform as much, I can move into choreography and the directing side of things.  Working with Mia has helped me with that and I’ve learned a lot about behind the scenes work, which I’m very grateful for. I’m hoping to continue to develop that.