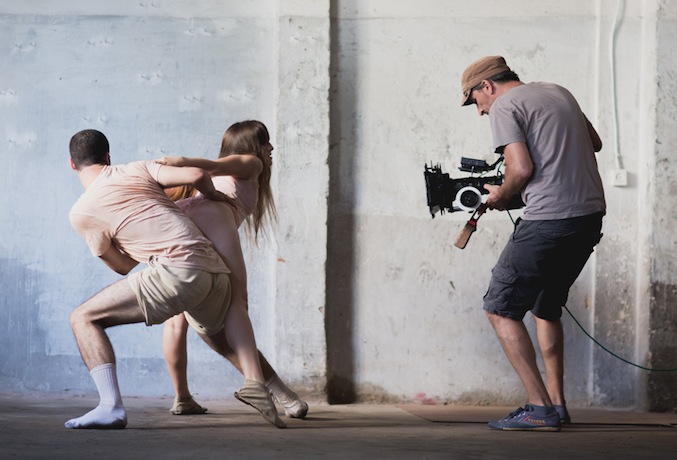 Now entering its 5th year, the San Francisco Dance Film Festival (SFDFF) will return November 6-9 at a new festival location, Brava Theater Center in San Francisco. During its four-day run, the festival will showcase some of the best dance films from around the world, including a wide collection of shorts as well as documentaries about the legendary Rudolph Nureyev and Vincent Patterson, the choreographer for Michael Jackson, Bjork and Madonna.

The festival kicks off on Sunday, November 2 with a special onstage discussion with acclaimed filmmaker and documentarian Frederick Wiseman at the Jewish Community Center of San Francisco’s Kanbar Hall. Excerpts from Wiseman’s La Danse, Ballet, Crazy Horse and The Boxing Gym will be followed by an onstage discussion moderated by Alonzo King, founder and artistic director of Alonzo King LINES Ballet.

SFDFF will also present its Co-Laboratory Project again, a unique collaboration between three teams of preselected choreographers and filmmakers. Project participants will create three short dance films in a week shortly before the festival, which will be premiered on the closing night of the festival, November 9, at the Brava Theater Center. Funded in part by The Kenneth Rainin Foundation and the Fleishhacker Foundation, Co-Laboratory seeks to inspire and support local artists of different disciplines to collaboratively create dance films for local and global audiences. This year’s Co-Laboratory artists include: choreographer Julia Adam with filmmaker RJ Muna; choreographer Robert Moses with director Morgan Wise; and choreographers Sara Shelton Mann and Jocquese Whitfield collaborating with director Cheryl Dunye.

Additional festival highlights include: a new screendance entitled Glove Story by renowned Israeli choreographer Dana Ruttenberg that explores the notion of personal space and its boundaries; a program dedicated to rhythmic dance forms, such as the film Mission Flamenca about a female troupe of flamenco dancers in SF’s Mission District; Carry It On by filmmaker Sharon Leahy, which presents a gathering of some of the finest old time percussive dancers in the country; and Tap or Die by Jackie Pare, which has a warm, vivacious tone and features numerous dance artists and experts.

The Man Behind The Throne by director Kersti Grunditz will be another special feature of the festival. The film chronicles famed choreographer Vincent Paterson, who, although unknown to most people, has had his choreography imitated in front of millions. His work includes pieces with Michael Jackson, Bjork and Madonna. The film follows a year in his life; in sweaty rehearsals for the Cirque du Soleil show Viva Elvis!, we see the tough work ethics, his humor and the artistic integrity that has shaped his career. He shares his private life among friends and family. Clips from his previous work, his own rehearsal footage and witty journals shape the story of an unusual artist in the commercial world.

Plus, the life work of modern dance pioneer Paul Taylor will be recognized at this year’s SFDFF. In Paul Taylor: Creative Domain, director Kate Geis allows viewers to witness a rare exploration of his 60+ years of creation and his work ethic.

Tickets for all festival events are now available. For more information, watch the festival’s trailer below or visit www.SFDanceFilmFest.org. The Brava Theater Center is located at 2781 24th Street in San Francisco.

Photo: A moment on set for the 2013 dance film Home Alone featuring the Batsheva Dance Company, which will be presented at the 2014 San Francisco Dance Film Festival. Photo by Zohar Ralt.