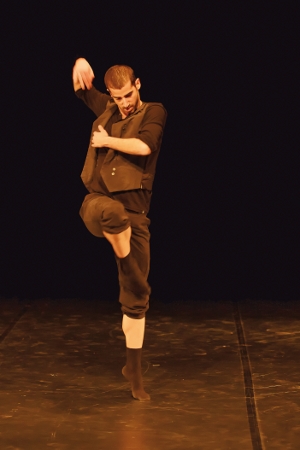 Entries are open for choreographers and dancers wishing to take part in the 17th Solo-Tanz-Theater Festival in TREFFPUNKT Rotebuehlplatz in Stuttgart, Germany. Artists from all around the world with a passion for dance and music are invited to bring their contemporary, choreographed dance solos to Stuttgart.

The dance pieces should be no more than one year old and should last between 9 to 12 minutes. The jury is looking for original, imaginative and unusual performances, with a unique style. The choreographer may personally perform the piece. Points shall be given for the quality of the choreography and the dancing, the dramatic composition, musicality, personality, creative potential and for the work as a whole.

Entries are only accepted online on
www.hommage-tanja-liedtke.de.

Entries close on 11th November 2012, after which the organisers shall choose 18 solo pieces from amongst the entries for the 2013 festival.

Over the last 16 years, the Solo-Tanz-Theater Festival, under the artistic direction of Marcelo Santos, has grown into an internationally-renowned dance event which draws artists from all over the world into TREFFPUNKT Rotebuehlplatz in Stuttgart, Germany. From 14th to the 17th March 2013, the stage in the Robert Bosch hall shall again become the venue for an international dance event. For four whole days, contemporary choreographers and young dancers shall be showcasing their newest, modern, individual and experimental works in front of a prestigious, international jury.

In previous years, the jury has included such names as Sonia Santiago-Brückner, former principal ballerina at the Stuttgarter Ballett, as well as honorary Stuttgarter and head of the dance ensemble Gauthier Dance, Eric Gauthier. On each of the first three evenings, six competitions entries shall be showcased, the majority premieres. On the third evening, the jury shall announce the nominations for the final. As in previous years, the 2013 audience shall also be involved with the choosing of an audience favourite.

The jury will award a total of six prizes, three in the category choreography and three in the category dance. The first prize is worth €3,500, the second €2,500 and the third prize €1,500. In May and November 2013, the prize winners shall then go on tour in Germany and abroad, appearing at TREFFPUNKT Rotebühlplatz once again in a gala on the 15th and 16th November 2013.

With the welcome addition of the Tanja Liedtke Foundation last year, the Solo-Tanz-Theater-Festival has gained a new partner, whose support has secured the future of the festival for the next five years. Together with the city of Stuttgart, the Tanja Liedtke Foundation financially supports the festival, enabling an annual event which plays an important role in advancing the talent of the future.