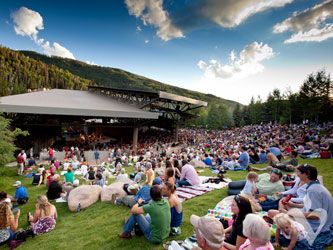 The Vail International Dance Festival reaches an important milestone this year as it celebrates its 25th Anniversary with special programming and exciting events, including a world premiere by the living legend of modern dance, Paul Taylor. The Vail premiere will mark Taylor’s 139th creation.

“My dancers and I look forward to performing in Vail, one of the country’s most idyllic spots, and this summer I am especially eager to see the world premiere of my new dance in the beautiful environs of the Ford Amphitheater,” Taylor said.

Paul Taylor Dance Company will present the world premiere on Monday, August 5 as part of NOW: Premieres Hosted by Damian Woetzel. Unique to Vail, the evening brings a selection of today’s most innovative and renowned choreographers together on one stage, and is hosted by Festival Director Damian Woetzel. In addition to Taylor’s world premiere, the performance will include new works by Larry Keigwin, Brian Brooks, Charles “Lil Buck” Riley and others to be announced.

Other 25th Anniversary season highlights are a series of performances by Pacific Northwest Ballet as part of two unique programs and the Opening Night Celebration, with repertoire to include the classic Swan Lake (Act II), choreography by Kent Stowell, and Balanchine in Black & White, an evening of masterworks by George Balanchine.

Additional festival performers include Charles “Lil Buck” Riley, who returns to Vail after a world tour accompanying Madonna; New York City Ballet stars Tiler Peck and Robert Fairchild as the 2013 Festival Artists in Residence; International Evenings featuring stars from around the world to be announced; a special UpClose: Footwork performance celebrating a variety of dance styles, from Memphis jookin’, to tango and classical ballet; plus the return of audience favorites Ballroom Spectacular and Dance TV.

For more information on the 2013 Vail International Dance Festival running from July 28 to August 10 in Vail, Colorado, visit www.vaildance.org. Tickets for the festival will go on sale March 13 at 11 a.m.