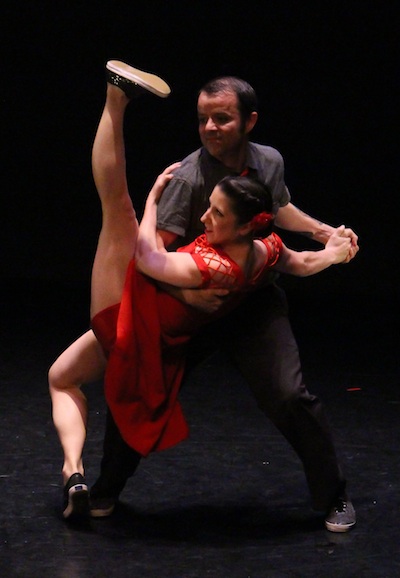 This Friday, May 2, the Group Theatre Too (GTT) presents its seventh annual Choreographer’s Canvas, a one-night event featuring the works of over 15 established and emerging choreographers from around the country. The Canvas, headed by GTT Executive Producer Justin Boccitto, will play at the Manhattan Movement and Arts Center (MMAC) and will showcase many styles of dance, including tap, ballet, jazz, hip-hop, contemporary, theatre dance, aerial and this year, bellydancing.

Over the past six years, the Canvas has presented more than 75 choreographers, providing 500 dancers the opportunity to perform to sold-out houses. The event is sponsored by Broadway Dance Center, Capezio, Manhattan Movement and the Society of Directors and Choreographers, as well as numerous arts philanthropists.

This year, the Canvas includes aerial choreographers (Bobby Hedglin-Taylor with Cleo Carol Knopf, Stephanie Sine and Jen Gorman) presenting silks, lyra and spanish web pieces. Bob Boross will present a new piece in the style of the late Matt Mattox on Sue Samuels’ company Jazz Roots, who is also a represented choreographer with her piece The Swing’s The Thing.

New to the Canvas is Syncopated City’s Michael Jagger and Evita Race, as well as K.C. Castellano, who has worked on So You Think You Can Dance. Several guest and full-time faculty members from Broadway Dance Center will present work, including Bronwen Carson, Calen Kurka, Janine Michelletti, Jerica Niehoff, Crystal Chapman and Broadway Dance Center’s teen company, AIM.

The 2014 Choreographer’s Canvas will be presented this Friday, May 2 at 7:30 p.m. at the Manhattan Movement and Arts Center, located at 248 West 60th Street, between Amsterdam and West End Avenue in NYC. To learn more or to purchase tickets, visit www.choreographerscanvas.com.