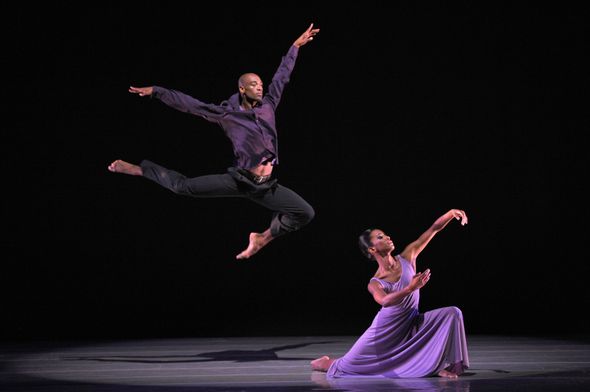 For two weeks, audiences will experience 14 performances featuring two dynamic programs, which come on the heels of a successful North American tour to over 30 cities and an array of critically acclaimed performances in Germany and France.

Ailey II is universally renowned for merging the spirit and energy of the country’s best young dance talent with the passion and creative vision of today’s most outstanding rising choreographers. In 1974, Alvin Ailey created the company to prepare dancers for professional careers and to give meaningful opportunities to emerging choreographers. The company is known for cultivating the star power of dancers aged 18–24, helping them to perfect their craft and go on to become concert, Broadway, and commercial dance luminaries. As was true for Artistic Director Troy Powell, nearly 70 percent of current Alvin Ailey American Dance Theater members were once a part of Ailey II.

With Troy Powell at the helm, Ailey II continues to thrive as he brings a fresh dimension to this beloved company. Powell, the veteran Ailey dancer, teacher, choreographer and former Ailey II Associate Artistic Director, was chosen to succeed Sylvia Waters in July of 2012 and presented his first record-breaking season at the company’s home last March.

“I could not be more excited to celebrate Ailey II’s 40th anniversary by bringing together the best young dancers with today’s most promising choreographers,” Powell said. “There is something for everyone, and we seek to inspire, enlighten and entertain all. Ailey II played such an integral role in my development as a young dancer in the late 1980s, and I’m so proud that the company has served as a bridge from the classroom to the stage for hundreds of dancers since its inception.”

On opening night, Wednesday, April 2, the All New Program begins with the world premiere of Alchemies, in which up-and-coming choreographer Adam Barruch transforms everyday gestures – a reach, an embrace, a finger pointed skyward – into a reverie of human interactions. While this is a non-narrative work, the dancers’ characters come to the foreground as they move through the patterns Barruch has created, accentuated by a layered electronic soundscape by the London duo Raime. Barruch was part of Robert Battle’s inaugural New Directions Choreography Lab in 2011 and has choreographed for The Ailey School and River North Dance Chicago, among others.

Next on the program is the world premiere of Polish choreographer Katarzyna Skarpetowska’s Cuore Sott’olio (meaning “heart submerged in oil.”) In this work, a female figure tumbles through the memories of past relationships in a fusion of folk dance and contemporary movement. At times wistful, turbulent and joyous, this new work, set to music by Alva Noto and Vincio Capossela, captures the essence of a love lost and a rediscovered light within. Skarpetowska’s choreography has been performed by Parsons Dance, Buglisi Dance Theater, Hubbard Street 2, Houston Metropolitan Dance Company, Patricia Kenny Dance Collection, The Ailey School, George Mason University, Ohio University, Kansas University and New Jersey Dance Theater Ensemble.

The All New program ends with the world premiere of rising choreographer Jennifer Archibald’s Wings, an unabashedly emotional portrayal of interactions between angels and humans. Set to an ambient score by veteran dance composer Michael Wall, Archibald’s movement is ferocious yet vulnerable, showcasing both the dancers’ athletic prowess and raw honesty. A 2012-13 New Directions Choreography Lab Fellow, Archibald received her professional training from The Ailey School and has choreographed for off-Broadway shows and The Ailey School, among others. She is also the Founder and Artistic Director of the Arch Dance Company.

The alternating Returning Favorites program, premiering on Thursday, April 3, begins with a restaging of Alvin Ailey’s 1970 work Streams, an abstract exploration of bodies in space danced to a percussive score by Miloslav Kabelac. This standout work was Alvin Ailey’s first full-length dance without a plot.

Following Streams is We, a charming duet by Alvin Ailey American Dance Theater Artistic Director Robert Battle, depicting a seasoned relationship between a couple. Capturing the spirit of familiarity and vulnerability that is as endearing as reaching for a hand and knowing the other’s will always be there, Battle set this work to composer Sean Jones’ tender “Love’s Lullaby.”

Paris-born choreographer Benoit-Swan Pouffer, a former member of Alvin Ailey American Dance Theater and former Artistic Director of Cedar Lake Contemporary Ballet, brings a European sensibility to Ailey II’s repertory with his 2012 work Rusty. Set to the pulsating tones of a score by composer Mikael Karlsson, Rusty features ethereal movement and lush partnering. This contemporary piece for nine dancers explores the experiences of young artists – the challenges they face and the relationships they build as performers.

The Returning Favorites program closes with a recent work from the 2012-13 season, Virtues by Amy Hall Garner. Garner is emerging as one of America’s most diverse creative talents, with a career that spans from Broadway to ballet. Virtues, set to a vibrant score by Karl Jenkins, Garner delivers high energy with a sophisticated edge. The dancers radiate with regal grace, deftly executing a distinctive blend of contemporary, modern and jazz movement.