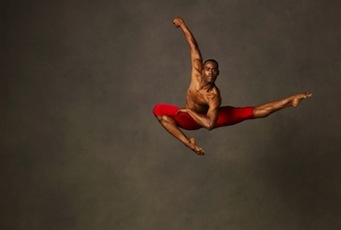 Along with many other choreographic works that Alvin Ailey American Dance Theater will present during its season at the New York City Center this December 4 to January 5, the company will present the world premiere of contemporary choreographer Aszure Barton’s LIFT.

According to the Alvin Ailey website, LIFT will be a “propulsive” work that “accentuates the vitality and physical prowess of the Ailey company.” In-demand choreographer Aszure Barton, also Founder and Director of her international dance project Aszure Barton & Artists, worked with Ailey dancers over a five-week period to create the work.

Driven by the dancers’ passion, skill and collective power, LIFT is set to a percussive score composed by Curtis Macdonald. The score is inspired by and infused with the infectious energy and heart that Barton observed in her initial encounters with the Ailey dancers.

Barton’s exhilarating new work, her first commission for Ailey, will celebrate and challenge these world-renowned dancers with its markedly intricate rhythmic patterns and mercurial structure.

A much sought-after dance maker whose choreography ranges from Baryshnikov to Broadway, Barton has a style that is vulnerable and yet feisty, deep and yet subtle.

On her new work, Barton says, “LIFT embodies an atmosphere and energy created by our time spent together in collaboration. I feel very welcomed by the Ailey family and am honored to be working with such a wonderful group of artists.”

LIFT will be presented as part of the company’s annual season at the New York City Center. Works will also be presented by choreographers such as Wayne McGregor, Bill T. Jones, Ronald K. Brown, and of course, Alvin Ailey. For more information, visit www.alvinailey.org. Tickets will go on sale Tuesday, September 3 at 11 a.m.