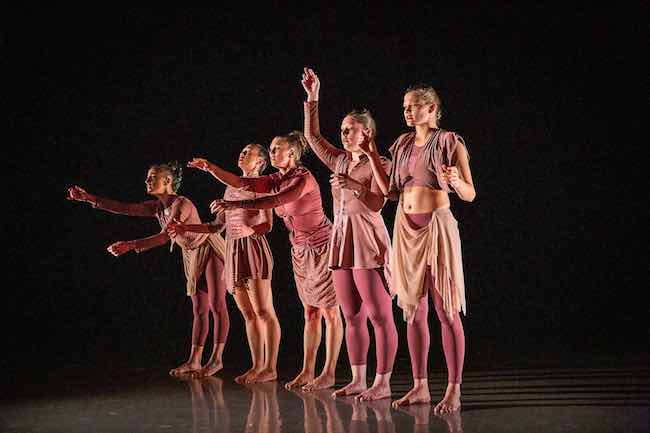 Award-winning contemporary choreographer Ariel Grossman and her company of seven female dancers will celebrate the 12th Anniversary of Ariel Rivka Dance (ARD) with two premieres, repertory and guest artists at Baruch Performing Arts Center in New York City. The program will take place in four performances, Thursday, March 28 through Saturday, March 30 at 7:30 p.m., with a family matinee on March 30 at 11:30 a.m. The two premieres are Mossy and Rhapsody in K, which will feature newly commissioned scores by composers David Homan and Stefania de Kenessey. Live music will be included at all performances.

Founded in 2008, Ariel Rivka Dance is an all-female contemporary dance company led by married choreographer/composer team Ariel Grossman (Artistic Director/Choreographer) and David Homan (Executive Director/Composer). Her choreography emanates from a female worldview, often using the lens of motherhood, nursing and child rearing as a platform for emotional yet organized thematic contexts. Inspiration is drawn from the struggles and joys of the human experience. She and the dancers work together to transform these emotions into shapes and stories.

“The dance world has been full of male choreographers, for centuries… choreography is yet another lens of expression that has been influenced mainly by men. But I have a lot to say and so do many other women,” said Ariel Grossman. “I am inspired by the juxtaposition of grace and strength, and I choreograph to capture those seemingly opposite qualities. My dancers embody that spirit.”

For more information on ARD and its upcoming program lineup, visit www.arielrivkadance.com.