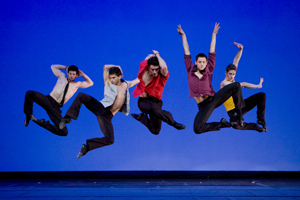 This weekend, Oct 29 and 30, Rasta Thomas’ Bad Boys of Dance are bringing their cheeky and energetic show to Michigan in a Detroit Opera House premiere. From dancing on catwalks at New York’s fashion week to appearing on Dancing with the Stars, the dancers’ amazing versatility and talent push the bounds of dance with athletic jumps, endless turns and endearing individuality.

Founded by dance superstar Rasta Thomas in 2007, BBD dancers have performed on Broadway, in feature films, and have been adored by millions on hit TV shows. Last year they performed at Carnegie Hall with Sir Elton John for a charity event alongside Lady Gaga, Sting and Bruce Springsteen. Today the company gives more than 150 shows a year and has performed for fans worldwide, and had the distinct honor of performing at the opening ceremonies of the USA International Ballet Competition.

After Detroit, the Boys will move onto shows in Carmel IN, Chicago IL, Baton Rouge LA and Stuart FL before taking off to France and Switzerland.