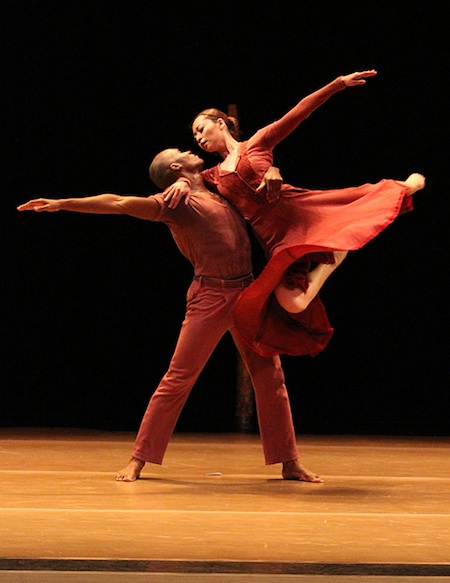 Following a performance at The Apollo Theater in New York City on Saturday, November 23, Ballet Hispanico will soon thereafter venture to the Kennedy Center in Washington D.C. for two performances in the Eisenhower Theater. Recognized as the nation’s leading Latino dance organization since 1970, Ballet Hispanico will present two performances on Thursday, December 5 and Friday, December 6 at 8 p.m.

Last seen in the Kennedy Center’s Concert Hall in 2007, Ballet Hispanico is now under the artistic direction of Cuban American dancer and choreographer Eduardo Vilaro. For its Kennedy Center mixed repertory program, the company brings Spanish choreographer Nacho Duato’s Jardí Tancat, the D.C. premiere of Spanish choreographer Cayetano Soto’s Sortijas (Rings), a new work by Annabelle Lopez Ochoa, and Eduardo Vilaro’s Danzón with live music by Paquito D’Rivera, who joins the company for this engagement. On December 5, there will be a free Explore the Arts post-performance discussion with a moderator and members of the company.

Duato’s very first work, Jardí Tancat is based on Catalonian folk tales sung by Maria del Mar Bonet. The ballet evokes the despairing yet hopeful prayers of Spaniards who wait for rain on their barren land. Soto’s Sortijas is a duet that celebrates Latino tradition by representing the circular ties of family and friends that link communities together over generations. The piece is set to music by American-born singer and songwriter Lhasa de Sela. Initially evolved from Haitian contradance, the Danzón has been called the official dance of Cuba. Eduardo Vilaro has taken this traditional and quintessentially Cuban dance form and reinvented it with contemporary language to construct a joyous celebration of music and movement.

Founded more than 40 years ago, New York–based Ballet Hispanico performs works across the country that explore the diversity of Latino culture through a fusion of classical, Latin and contemporary dance powered by theatricality, athleticism and passion. For more information or to book tickets, visit www.kennedy-center.org. Ticket prices range from $20 to $60 and can be purchased at the Kennedy Center Box Office or by calling Instant Charge at (202) 467-4600.