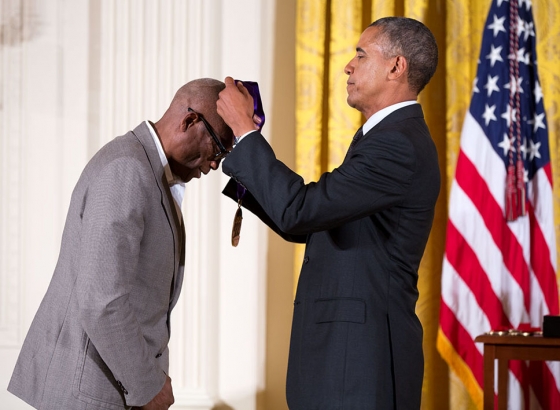 On Monday, July 28, the President and the First Lady honored the 2013 National Medals of the Arts and Humanities recipients at the White House. The President told the recipients that their “accomplishments enrich our lives and reveal something about ourselves and our country.”

This year’s recipients consisted of a diverse array of individuals and groups who have done groundbreaking work in the arts and humanities, including architecture, choreography, East Asian Studies and documentary filmmaking – all of whom have made significant contributions to the human experience.

Representing dance, choreographer Bill T. Jones was awarded a National Medal of Arts. Renowned for provocative performances that blend an eclectic mix of modern and traditional dance, Jones creates works that challenge us to confront tough subjects and inspire us to greater heights.

As the artistic director of New York Live Arts and artistic director/co-founder of the Bill T. Jones/Arnie Zane Dance Company, Jones has received major honors ranging from a 1994 MacArthur “Genius” Award to Kennedy Center Honors in 2010. He was honored with the 2014 Doris Duke Award, recognized as Officier de l’Ordre des Arts et des Lettres by the French government in 2010, inducted into the American Academy of Arts & Sciences in 2009, and named “An Irreplaceable Dance Treasure” by the Dance Heritage Coalition in 2000. He is a two-time Tony Award recipient for Best Choreography for FELA! and Spring Awakening and received an Obie Award for Spring Awakening‘s off-Broadway run. His choreography for the off-Broadway production of The Seven earned him a 2006 Lucille Lortel Award.

“The moments you help create – moments of understanding or awe or joy or sorrow – they add texture to our lives,” said President Barak Obama to this year’s honorees. “They are not incidental to the American experience; they are central to it – they are essential to it. So we not only congratulate you this afternoon – we thank you for an extraordinary lifetime of achievement.”

Here is the full list of recipients from this year’s event: