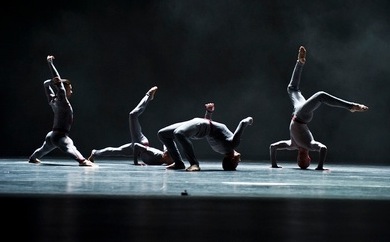 DANCECleveland, a dance presenting organization with roots going back to January 1956, will continue its 2013-2014 season with the Northeast Ohio debut of Cedar Lake Contemporary Ballet, the hot New York City-based dance company that has captured worldwide attention during its short 10-year history. Cedar Lake will come to the Ohio Theatre in Playhouse Square for two performances on January 25 and 26.

Cedar Lake has become a New York City success story with its roster of technically strong dancers, movement styles from ballet and modern to hip-hop, and its formidable repertory of works by A-list choreographers. The New York Times calls the company “possibly the country’s most innovative ballet troupe.”

The company’s two performances in Cleveland will feature three dances from its eclectic repertory. Indigo Rose, created by choreographer Jiří Kylián for Nederlands Dans Theater in 1998 and first performed by Cedar Lake in 2013, is set to a range of music from J.S. Bach to John Cage. Ten Duets on a Theme of Rescue, created for the company by Canadian award-winning choreographer Crystal Pite, uses musical selections from the original motion picture soundtrack of “Solaris” by Cliff Martinez. Horizons by Greek choreographer Andonis Foniadakis will feature music by Julian Tarride.

The engagement will also include a free pre-performance talk in the theatre at 7:15 p.m. on Saturday and at 2:15 p.m. on Sunday. A post-performance moderated Q&A session with members of the company will immediately follow each show.

To book tickets to see Cedar Lake in Cleveland, visit www.dancecleveland.org. Tickets starting at $20 for the Saturday evening performance at 8 p.m. and Sunday matinee at 3 p.m. are now available.

In addition, several master classes will be conducted by company members prior to the performances. A teen contemporary ballet master class for ages 12-18 will be held on Friday, January 24 from 6-7:30 p.m. in the green rehearsal hall at PlayhouseSquare. It will be conducted by Cedar Lake dancer Billy Bell, known to many for his appearances on television’s So You Think You Can Dance program. On Saturday, January 25 from 11 a.m. – 12:30 p.m., a contemporary pre-professional/professional level master class will be held at Cleveland State University’s studios in the Middough Building on the fifth floor. Participants are required to register in advance by emailing sarah@dancecleveland.org or by calling 216-991-9000.