Cirque du Soleil brings the world of OVO to NC 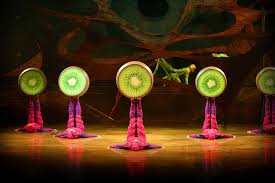 Cirque du Soleil brings the world of OVO to TALKING STICK RESORT ARENA NC, February 20-23, 2020. OVO is teeming with life. Insects work, play, fight and look for love in a non-stop riot of energy in motion. Their home is filled with biodiversity, beauty, action and moments of quiet emotion. The awestruck insects are intensely curious when a mysterious egg appears, representing the enigma and cycles of their lives.

Thrilling more than 6 million people worldwide since the show premiered in Montreal in 2009 as a Big Top show, OVO embarked on a new journey, performing the same captivating production, but in arenas in 2016, giving more people the opportunity to enjoy a Cirque du Soleil show in their own town. Since 2016, the arena tour has traveled in 22 different countries, including Germany, Brazil, United States, Canada, Argentina, France, Spain, Portugal, United Kingdom and Chile.

Ticket Information can be found at www.cirquedusoleil.com/ovo