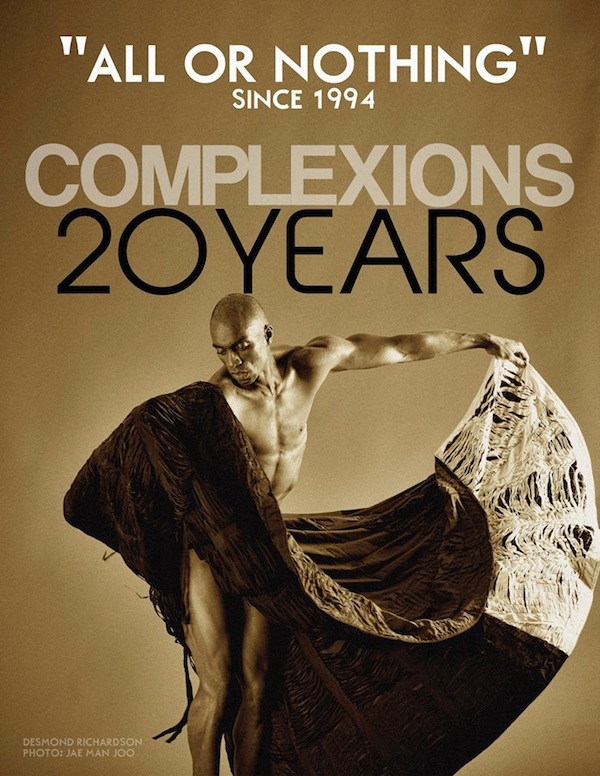 Complexions Contemporary Ballet will celebrate its 20th anniversary season with a run at The Joyce Theater in New York on November 18-30. With a program consisting of three premieres and a selection of repertory favorites, Artistic Directors Dwight Rhoden and Desmond Richardson salute the company’s inaugural 1994 performance with appearances featuring special guest artists, including Desmond Richardson and American Ballet Theatre’s Misty Copeland.

Highlights include a Rhoden-choreographed world premiere entitled Head Space, set to the music of legendary New Orleans jazz musician and Grammy Award winner Terence Blanchard. In 2013, Complexions began collaborating with Blanchard on a dance-and-music-on-camera project. In 2014, Rhoden and Blanchard have expanded their relationship to create a new 30-minute ballet for the stage featuring 12 dancers and select compositions from Blanchard’s albums.

Both Rhoden and Blanchard are interested in playing with scale, volume and magnitude as storytelling devices through music and dancing. How can you convey the breaking point of emotion through movement? What is the aftermath of large explosions of sound? What effect does juxtaposing dense orchestration with spare instrumentation create?

This new work will use Blanchard’s composition of trumpet, strings, woodwinds and percussion as the backbone of its narrative and will be a collection of short scenes following a cast of characters. The scenes will build up and disperse character relationships and stories, taking viewers on a surprising journey.

The 2014 season will also include the New York City premiere of a new work choreographed by ABT Principal Marcelo Gomes, entitled Igual. The work is set to an original score by acclaimed composer Ian Ng and is inspired by love and marriage equality.

Complexions will also offer the world premiere of a new company work, The Groove, which is inspired by the House music scene of the 1980s. Classic Complexions’ works like Hissy Fits and Testament, among other company favorites, will also be presented.

On November 20, Complexions will have a special evening of performances prior to its Gala. The evening will feature Copeland in Rhoden’s signature duet Ave Maria, an excerpt from Grapes of Wrath (1995) by Complexions’ Artist-in-Residence Clifford Williams and Desmond Richardson in a solo excerpt from Rhoden’s 2011 ballet What Come Thereafter.

For tickets to the after-show Gala, call 212-777-7771. For general tickets, visit http://Joyce.org. For the most up-to-date schedule for all Complexions Contemporary Ballet programming, visit www.complexionsdance.org.