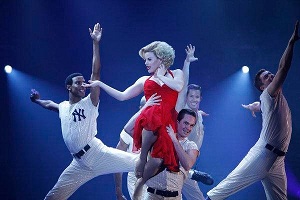 Dancing with the Stars won two awards at last night’s 64th Primetime Emmy’s. The popular ballroom dancing show won ‘Outstanding Makeup For A Multi-Camera Series Or Special (Non-Prosthetic)’ and ‘Outstanding Host For A Reality Or Reality-Competition Program’, with Tom Bergeron beating So You Think You Can Dance’s Cat Deeley for the honors. So You Think You Can Dance took home an award for ‘Outstanding Lighting Design | Lighting Direction For A Variety Series’.

Choreographers Stacey Tookey, Spencer Liff and Christopher Scott were all nominated for awards for their work on SYTYCD, as well as Travis Wall, Teddy Forance and Nick Lazzarini for a piece performed on Dancing with the Stars. However, Joshua Bergasse took home the top prize for ‘Outstanding Choreography’ for his work on Smash.

Photo: Megan Hilty as Ivy Lynn in Smash. Photo by Will Hart/NBC