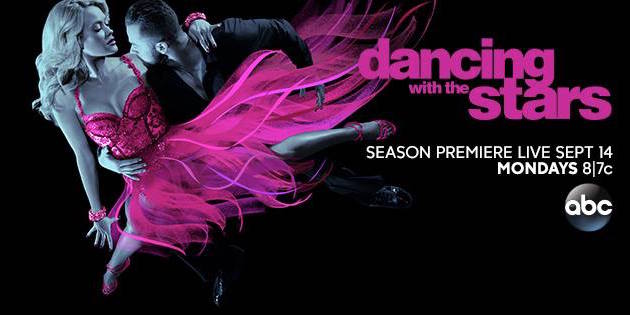 The celebrity cast of Dancing with the Stars is strapping on their ballroom shoes and getting ready for their first dance on Monday, September 14 at 8-10 p.m. ET on ABC. The 21st season lineup of celebrity dancers and their pro partners was announced this morning on Good Morning America.

– Grammy-nominated singer, talk show host and reality TV personality Tamar Braxton with Valentin Chmerkovskiy. Braxton is a veteran performer who began singing backup vocals for her older sister Toni at age 12, Tamar Braxton was also a founding member of R&B group The Braxtons with Toni and their siblings Traci, Towanda and Trina. Tamar’s third solo album, Calling All Lovers, releases September 11, 2015. Tamar executive produces and stars with her sisters in the WE TV reality hit Braxton Family Values, as well as the spinoff Tamar & Vince, with her music manager husband Vince Herbert. Elsewhere on the TV front, Braxton co-hosts and produces the daytime talk show, The Real.

– Actor Gary Busey with Anna Trebunskaya. Busey celebrates his 45th anniversary in show business this year. He rose to fame in Hollywood when he became an Academy Award nominee for Best Actor for his performance in the title role of Buddy Holly in The Buddy Holly Story. His other feature film credits include memorable roles in The Firm, Under Siege, Point Break and Lethal Weapon. He’s also appeared on Celebrity Wife Swap and Celebrity Apprentice, and became the first American to win Celebrity Big Brother U.K. in 2014.

– Singer, songwriter and actor Nick Carter with Sharna Burgess. Carter started his career at the tender age of 12 as the youngest member of the iconic boy band Backstreet Boys, which has sold over 130 million records worldwide and earned five Grammy nominations. Carter was named one of People Magazine’s “50 Most Beautiful People in the World,” has released two solo albums, and starred with his fiancé in the VH1 reality series, I Heart Nick Carter.

– Celebrity chef and Southern personality Paula Deen with Louis Van Amstel. One of the best-known personalities in the world of cooking, Paula Deen is the author of 14 cookbooks that have sold more than 8 million copies. In addition to her many television successes, Paula launched Paula Deen Live! in 2014, a nationwide tour of 90-minute shows featuring Paula making her favorite seasonal dishes. On her digital lifestyle network, the Paula Deen Network, Paula provides viewers with cooking tips, new recipes and step-by-step instruction on how to cook her signature Southern dishes in an unscripted format.

– Triple Crown-winning jockey Victor Espinoza with Karina Smirnoff. After coming close twice, jockey Victor Espinoza earned the famous Triple Crown earlier this year, winning the Kentucky Derby, The Preakness and The Belmont Stakes aboard speedy American Pharoah. It was the first time in 37 years the feat had been accomplished. The first Hispanic jockey to ever win the Triple Crown, Espinoza has won over 3,000 races in his career and donates 10% of his weekly winnings to The City of Hope for childhood cancer research.

– “Honey, I’m Good” singer Andy Grammer with Allison Holker. With his 2011 self-titled debut album, this pop singer became the first male pop star in a decade to reach the Top 10 at Adult Pop Radio on his first two singles, “Keep Your Head Up” and “Fine By Me,” certified platinum and gold respectively. Andy’s second album, 2014’s critically acclaimed Magazines or Novels, continues his disarming success.

– Social media star Hayes Grier with Emma Slater. At just 15 years old, Hayes is a rising star in the social media world, with more 3.5 million followers on Vine and more than two million Twitter followers. The North Carolina teen shot to fame with his personal videos and is currently on a live tour across the United States.

– The 17-year-old Australian wildlife conservationist and actress Bindi Irwin with Derek Hough. The teen has continued the legacy of her parents, Crocodile Hunter Steve Irwin and Terri Irwin, starring in a series of wildlife shows, including “Bindi: The Jungle Girl,” “Bindi’s Bootcamp” and “Steve Irwin’s Wildlife Warriors.” As an actress, Bindi starred in the films Free Willy: Escape from Pirate’s Cove and Return to Nim’s Island. In 2014, Bindi was awarded the prestigious Australian Geographic Society’s Young Conservationist of the Year, an honor that she dedicated to her late father, Steve Irwin.

– International music icon Chaka Khan with Keo Motsepe. Khan has influenced multiple generations of artists and continues to do so as a singer, songwriter, producer, visual artist, author, actor, philanthropist, entrepreneur, activist and mother. A 10-time GRAMMY® Award winner who has the rare ability to sing in eight music genres, Chaka has released 22 albums and racked up 10 #1 Billboard magazine charted songs. She is currently at work on a series of mixed media visual works with a planned gallery exhibition in 2016, as well as a new CD, set for release later in 2015.

– Actress Alexa PenaVega with Mark Ballas. Alexa is known worldwide for her role as Carmen Cortez in four blockbuster Spy Kids films, as well as Machette Kills and From Prada to Nada. PenaVega made her Broadway debut in 2007 when she played Penny Pingleton in the Tony Award-winning Broadway version of Hairspray. Fans of the ABC hit drama Nashville also know her for her turn as Kiley Brenner. Alexa is married to actor/singer Carlos PenaVega, who will also compete in DWTS Season 21.

– Actor/singer Carlos PenaVega with Witney Carson. Carlos shot to fame and cult status after starring on the highly successful Nickelodeon musical comedy Big Time Rush, which also took to the road and toured with the ensemble cast around the globe. Having studied musical theater at the Boston Conservatory, Carlos recently released his first solo single in Spanish, Electrico, which charted in the Top 10 on the Latin iTunes songs charts.

– Army National Guard Specialist Alek Skarlatos with Lindsay Arnold. He became a worldwide hero in August when he helped avert a massacre aboard a Belgian train. While on vacation after a deployment in Afghanistan, the 22-year-old sprang into action when an armed attacker began shooting on the train. Alek and two of his friends, Airman 1st Class Spencer Stone and student Anthony Sadler, disarmed and subdued the attacker, who was armed with guns and a box cutter. The California native is an avid painter and military history buff. In between National Guard deployments, Alek studies at a local community college and plans to enter the police force.

– Reality TV star Kim Zolciak Biermann with Tony Dovolani. Known for her blonde wigs, catchy pop songs and her vivacious personality, Kim is also the mother of six children. Her socialite status amongst Atlanta’s elite snagged her the reality spot on Bravo’s hit show Real Housewives of Atlanta. Her debut single, “Tardy for the Party,” reached the number three spot on iTunes. In April 2012, Kim’s spin off Don’t be Tardy for the Wedding debuted on Bravo. The series revolved around Kim’s extravagant wedding to NFL Falcons player Kroy Biermann. The series was a huge hit for Bravo, and is currently on air for its fourth season.