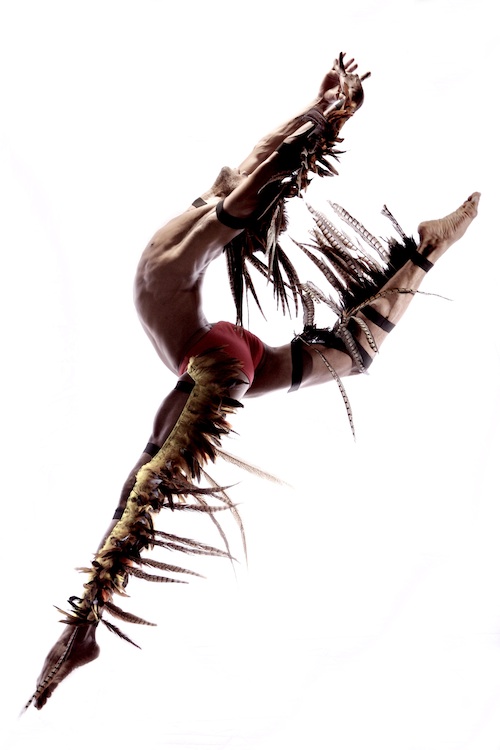 Dzul Dance will present Mexico Maya, a journey through the rich history of Maya and Mexico into contemporary western culture, on Friday and Saturday, January 24 and 25 and again on Friday and Saturday, January 31 and February 1 at Baruch Performing Arts Center in NYC. The choreographic work was created in 2013 by Artistic Director Javier Dzul to celebrate the 13-member company’s 10th anniversary.

Performed in three sections, Mexico Maya begins with the Maya creation legend of the twin ball players. The twins had the power to play ball with the stars, moons and the sun. They were summoned to the underworld when the noise of their game woke the gods of Xibalba, who then sacrificed the twins. From their blood a forbidden tree was born, and when a Mayan princess ate the forbidden fruit of the tree, she became pregnant with the first human being.

In the second section, choreographer Dzul explores his path from Maya to Mexico, Cuba and the U.S., and how that path has affected his loved ones. The work evokes the experience of missing one’s home and the feeling of being a foreigner in a foreign land.

The third section illustrates the inspiration and internal revolution needed to survive and grow. Dzul looks to the future of his company and the development of his artistic vision.

Dzul studied on scholarship at the Ballet Nacional de Cuba until 1989, when he was awarded a scholarship to the Martha Graham School in NYC. Since his arrival in New York, Javier has danced with numerous companies, primarily with the Martha Graham Dance Company, the Alvin Ailey Repertory Ensemble and the American Indian Dance Theater. He has guested with Acroback and Red Sky Productions, both located in Canada, and in 1995, received a Fondo Nacional para la Cultura y las Artes of Mexico to continue his dance career in the U.S.

Dzul began choreographing in 1999 and established his company Dzul Dance in 2003. In addition, he became founder and director in 2009 of Compania de Danza Contemporanea y Aerea del Gobierno del Estado de Campeche, a dance and aerial company funded by CONACULTA of Mexico and the Government of Campeche. The following year the government of Campeche awarded Dzul the Premio de San Francisco, an outstanding lifetime achievement award, for raising international awareness about Mayan culture.

After seeing Dzul dance, Kelly Apter of The Scotsman wrote, “Javier Dzul spent the first 16 years of his life in the Mexican jungle… All this makes perfect sense when you see his spellbinding solo, performed largely with his back to us. Muscles ripple in seemingly inhuman ways, before he moves, animal-like, across the floor and up into aerial silks, for a show of strength.”

For more information on Dzul Dance or Javier Dzul, visit www.dzuldance.com. To learn more about or to book tickets for the company’s performances at Baruch Performing Arts Center, go to www.baruch.cuny.edu. The center is located at 55 Lexington Avenue in NYC, with the entrance on 25th Street between Lexington and Third Street. Tickets are $25.