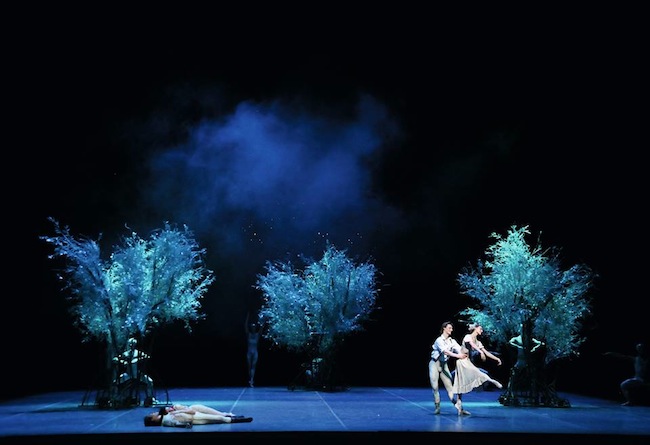 Houston Ballet Artistic Director Stanton Welch recently announced the company’s 2014-15 season lineup. In addition to four new works entering the company’s repertoire – including a world premiere by Mark Morris – Houston Ballet will celebrate the 450th anniversary of William Shakespeare’s birth by performing three ballets based on his most enduring tales. The first ballet is the company premiere of John Neumeier’s A Midsummer Night’s Dream, set to open the season next month.

From September 4-14, John Neumeier’s three-act ballet A Midsummer Night’s Dream will grace the stage at Wortham Theater Center. The ballet is based on Shakespeare’s lighthearted play of the same name and follows the hijinks and hilarity that ensues when a well-intentioned plan with a love potion goes awry.

Created in 1977, A Midsummer Night’s Dream has served as Neumeier’s calling card, being seen as one of his most joyous and popular creations. Houston Ballet will be the first American ballet company to perform the famous work.

“John Neumeier is one of the greatest choreographers of narrative ballets in the world today,” Welch comments. “With his four-decade tenure as artistic director of Hamburg Ballet, he has transformed that city into a mecca for dance. A Midsummer Night’s Dream is one of Neumeier’s signature works, a three-act ballet that is a funny, delightful romantic comedy with many magical elements.”

Neumeier’s production skillfully weaves together the three narrative strands of Shakespeare’s joyous romantic comedy: the four young lovers who flee the court of Athens for the forest; the world of the fairies, presided over by Oberon, king of the fairies, and his queen Titania, and their mischievous servant Puck; and the six craftsmen who set out to perform a hilarious amateur theatrical production of the love story Pyramus and Thisbe.

Writing in the South China Morning Post, Jason Gagliardi said he was “swept away by John Neumeier’s ambitious staging of the Bard’s densely-layered tale.” He wrote, “Here is a choreographer at the height of his power – his effortless ranging from classical grand pas de deux to writhing modern mayhem could easily have come over as a messy, silly hodge-podge in the hands of a lesser artist. But Neumeier – who perhaps more than any other choreographer successfully fuses the dance and literary worlds – guides us with assurance and a finely honed sense of humor through Shakespeare’s most loved comedy, from its bedroom-farce laughs to its exploration of the nature of illusion and reality…”

Particularly captivating is the set and costume design by internationally acclaimed German stage designer Jürgen Rose. The opening scene is opulent and awash with shades of blue and cream, and the costumes evoke the elegance of the Regency period. When the ballet shifts to the world of the fairies, the refined human world fades away to smoky green blackness and magical trees dot the stage.

For more information on A Midsummer Night’s Dream or other shows in Houston Ballet’s 45th season, visit www.houstonballet.org. The next two Shakespearian ballets this season are John Cranko’s The Taming of the Shrew and the world premiere of Stanton Welch’s Romeo and Juliet.

Photo: The Hamburg Ballet in John Neumeier’s A Midsummer Night’s Dream, which will soon be performed by Houston Ballet. Photo by Holger Badekow.