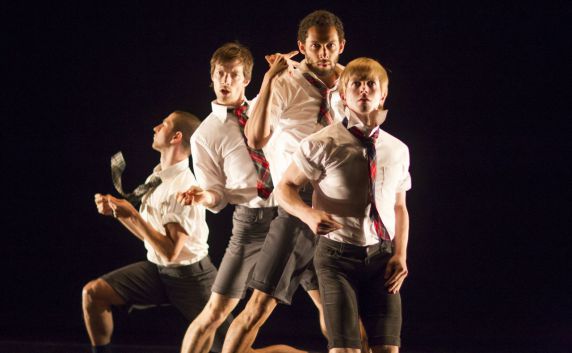 As part of danc(e)volve, dancers perform new works created by rising choreographers within the company and former main company member Robyn Mineko Williams. The 2013 two-week long festival will feature seven new works under consideration to become a part of Hubbard Street’s active repertoire. The program is curated by Hubbard Street Artistic Director Glenn Edgerton to highlight the MCA and Hubbard Street’s commitment to supporting emerging artists in the contemporary field. Performances take place at MCA’s Edlis Neeson Theater on June 6, 8, 9, 13, 14 and 15 (all sold out), and June 16 (matinee and evening showings).

For this year’s festival, two new works will be presented by Hubbard Street 2 Director Terence Marling. The first, titled stop…stop…stop, presents a lighthearted riff on power dynamics and miscommunication, featuring a young couple attempting to converse through fragmented voiceover, scrambled gestures and the interruptions of a showman. Only six minutes in length, the work features Marling’s original score, while also including selections from Patricia by Cuban bandleader Dámaso Pérez Prado, popularly known as the “King of the Mambo.”

Marling’s second work is set to the third Ruhevoll movement of Gustav Mahler’s Symphony No. 4 in G major. At nine minutes long, it features both main company and HS2 members (as does stop…stop…stop.)

Choreographed by Hubbard Street dancer Penny Saunders, the work Adalea will be presented as her personal farewell to the company. With plans to retire this summer after nine years with the company, Saunders’s 15-minute work is named after one of the names selected for her first-born child. The piece includes vignettes based on universal rites of passage and is set to music by Vincenzo Bellini, Tigran Mansurian, Göran Söllscher, and Antonio Vivaldi; all mixed by Marling.

For the Wandered, a work choreographed by Hubbard Street dancer Jonathan Fredrickson, “is a piece for people who feel they’ve lost their way,” Fredrickson said. At 18 minutes in length, it comes on the tails of his work Untitled Landscape from the first danc(e)volve: New Works Festival. This successfully joined the company’s repertoire for its 2013–14 season and was performed in Algeria, Morocco and Spain. For the Wandered, now highly anticipated, features text by Fredrickson and Hubbard Street dancer Alice Klock; music by Johann Sebastian Bach, Ludwig van Beethoven, William Basinski and Tim Hecker; and designs by Branimira Ivanova and Chicago-based visual artist Melena Ausikaitis.

A special presentation on the program, yet to be titled, is by Hubbard Street dancers and staff who traveled to Algeria, Morocco and Spain in March and April to perform and lead workshops in dance education as part of DanceMotion USA.

Also, post-show talks will be offered on Thursday, June 6 and Thursday, June 13, with Peter Taub, MCA Director of Performance Programs, leading a discussion with the artists and audience in the theater following the performance.