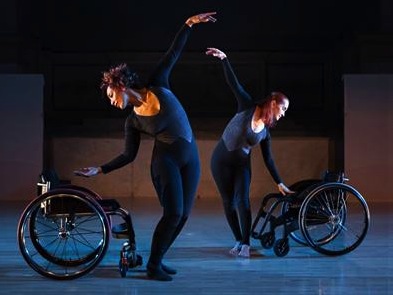 Kitty Lunn’s Infinity Dance Theater, the company for dancers with and without disabilities, will present Unbound: Dancing From Here to There, four performances featuring two different programs at Theater for the New City on December 6-8. The programs include choreography by Kitty Lunn, Peter Pucci, Alice Sheppard and Carla Vannucchi.

The first program, Program A, is set for Friday and Saturday, December 6 and 7 at 8 p.m. and will feature new and revived modern dance works. It will include Kitty Lunn’s The Unbound Suite, a world premiere work inspired by the elements of Feng Shui set to original music by composer William Catanzaro. The choreography will be performed by Lunn and Alice Sheppard.

Another premiere, From Here to There, is a trio for Lunn, Sheppard and Manuel Rojas with original music for keyboard and percussion, played live by Catanzaro. Then Peter Pucci’s 2009 duet Lead Me Home will be presented. A work for Lunn and actor Andrew Macmillan, it is set to three Celtic songs by composers Patrick Byrne, Turloug Carolan and Cearbhali O’da’laigh.

The premiere of Doors will present a solo choreographed and performed by wheelchair dancer Alice Sheppard. Featuring music composed by her musician father, it will reflect some of Sheppard’s background as an Englishwoman that is a former professor of medieval literature. Then Program A will be concluded with Italian dancemaker Carla Vannucchi’s 2009 Portrait of Frida, inspired by Frida Kahlo, an artist who knew intense passion and loss.

The second program, Program B, is set for Saturday and Sunday, December 7 and 8 at 3 p.m. As Infinity’s matinee program, The Women’s Stories Project is a unique and inspiring dance-theater work featuring four women with courage and resourcefulness to spare, telling their stories of love, loss, illness and aging. Women’s Stories is funny, sad, ironic and unpredictable.

Conceived, created and narrated by Lunn, the work features dancer Lynn Barr, dealing with the loss of her husband of 50 years; Lucy, who lost her mother to breast cancer and, after burying her in Puerto Rico, discovered that she had the same cancer; Alice, who became a wheelchair user as a result of a spinal disease; and Kitty Lunn, who while rehearsing for her first Broadway show took a violent fall down a flight of stairs, breaking her back and becoming paraplegic.

The program description states, “Though the women represent different ages, races and walks of life, they represent all of us, connected through common threads of humanity, with one another and with the audience, in this celebration of the triumph of the human spirit.”

For more information on Infinity Dance Theater and the upcoming Unbound performances, visit www.infinitydance.com. Shows will be at Theater for the New City, located at 155 First Avenue (between 9th and 10th Streets) in NYC. Tickets are $15 for general admission and $10 for students, seniors and the disabled. To make reservations, call the Box Office at (212) 254-1109. Tickets are now available.