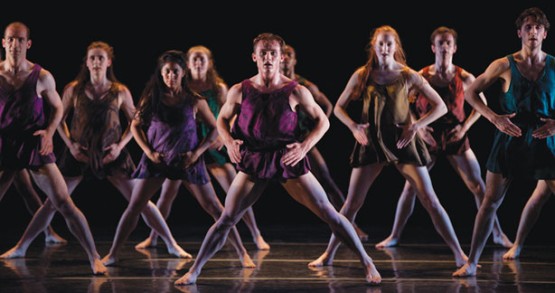 The Juilliard School recently announced that from April 28 to May 4 its Dance Division will be taking part in the second Assemblée Internationale (AI13), to be held in Toronto, Canada. Hosted by Canada’s National Ballet School (NBS), the AI13 will bring together students and artistic staff from 18 international professional ballet schools for seven days of intensive classes, performances, forums and professional development.

Students from participating schools will perform both a piece of existing repertoire, representative of their school’s culture, as well as a student-created choreography, which will be performed by a blended cast of students from each of the partner schools. Juilliard alumna Julia Eichten has choreographed Phases of Strobe for the six Juilliard dancers attending AI13.

The AI13 will also include an innovative live-streaming project that will explore the use of new technologies in dance. Shaun Amyot, NBS artistic faculty member and choreographer, has collaborated with Michael Schumacher, an Amsterdam-based choreographer, to create a work that will be performed by a blended cast of AI13 students present in Toronto and joined virtually through live streaming by dancers from the National Ballet Academy in Amsterdam. The live-streaming project, as well as several other AI13 performances and student classes, will be shown live on NBS’ website so that everyone worldwide can see and feel a part of the festival.

“We are delighted to be taking part in this year’s Assemblée Internationale and to be joining colleagues and students from Canada’s National Ballet School as well as the other participating schools to share our creativity and passion for ballet,” Rhodes said. “Knowing how successful the initial Assemblée Internationale was in 2009, especially in terms of enhancing student development and promoting professional development for artistic staff, we anticipate that the inspirations gained at this year’s AI13 will be of lasting benefit to our school, long after the AI has ended.”

The Juilliard Dance Division, in its 61st season in 2012-2013, is a groundbreaking conservatory dance program whose faculty and alumni have changed the face of dance around the world. The program was established in 1951 by William Schuman during his tenure as president of Juilliard with the guidance of founding director Martha Hill. It became the first major teaching institution to combine equal dance instruction in both contemporary and ballet techniques. Among the early dance faculty members at Juilliard were Alfred Corvino, Martha Graham, Doris Humphrey, José Limón, Anna Sokolow, Antony Tudor and Hector Zaraspe.