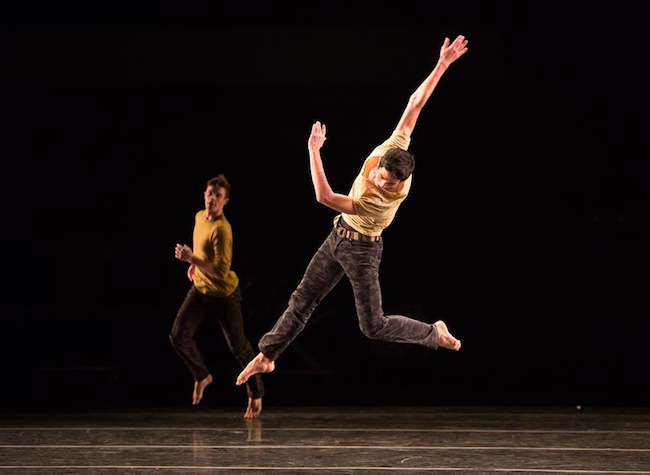 Austin McCormick, founder and artistic director of Company XIV, has had his works presented at The Kennedy Center, La MaMa, Symphony Space, The Flea, Alvin Ailey Theater, Mark Morris Dance Center and internationally in London, Scotland, Montreal and Mexico. He was the winner of the 2011 Robert L.B. Tobin Director-Designer Grant from Opera America for new directors in opera for the premiere of John Adams’ A Flowering Tree. In addition to choreographing, McCormick is also a filmmaker and in fact, was the first winner of the Susan Braun Grant Award from Dance Films Association.

Also a Julliard graduate, Loni Landon is the recipient of the 2013 Princess Grace Choreography Fellowship and the 2012 First Prize at Ballet Austin’s New American Talent Competition. In 2010, she co-founded the Playground in New York City, an open forum where professional dancers directly engage with emerging and established choreographers. As a sought-after dancemaker, her work has been commissioned by Northwest Dance Project, CityDance Ensemble and Ballet X. She has danced with Aszure Barton, Ballet Theater Munich and at the Metropolitan Opera.

Kate Weare, artistic director of Kate Weare Company, received the Guggenheim Fellowship Award earlier this year, the Mellon Foundation Award through The Joyce Theater’s Fellowship Program in 2011, and the Princess Grace Fellowship for Choreography in 2009. Her most recent work for her own company, Dark Lark, was presented by Brooklyn Academy of Music’s Next Wave Festival in 2013, marking her company’s BAM debut.

Larry Keigwin will be coming to set work on Juilliard as well. He will return after having already choreographed and premiered, in December 2008, Runaway, a large-scale piece that riffs on the high fashion runway scene, and in December 2009, Megalopolis. He is the founder of New York’s hip Keigwin+Company.

New Dances: Edition 2014 performances take place on: Wednesday, December 10; Thursday, December 11; Friday, December 12; and Saturday, December 13 at 8 p.m.; and Sunday, December 14 at 3 p.m. in Juilliard’s Peter Jay Sharp Theater. Tickets will be available in November online at http://www.juilliard.edu/newdances or at the Janet and Leonard Kramer Box Office at Juilliard.

Merce Cunningham’s BIPED was premiered by the Gavin Bryars Ensemble with the Merce Cunningham Dance Company on April 23, 1999 at Zellerbach Hall in Berkeley, California. A shimmering dance to a mesmeric score by Gavin Bryars, BIPED is a technically intricate work involving projected artwork by Paul Kaiser and Shelley Eshkar derived from a unique motion capture process devised in collaboration with the choreographer.

The Juilliard Dance Division, entering its 63rd season in 2014-15, is a groundbreaking conservatory dance program based in New York whose faculty and alumni have changed the face of dance around the world. Among the early dance faculty members at Juilliard were Alfred Corvino, Martha Graham, Doris Humphrey, José Limón, Anna Sokolow, Antony Tudor and Hector Zaraspe. This season, 99 students are enrolled in the program.

Photo: Juilliard students in Brian Brooks’ Torrent in 2013. Photo by Rosalie O’Connor. Juilliard Dance will perform this work at New York City Center’s 2014 Fall for Dance Festival on October 16 and 17.