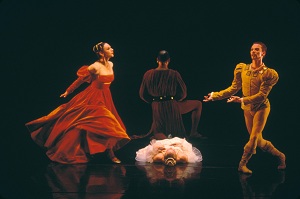 As Limón Dance Company celebrates its 65th Anniversary, José Limón’s seminal work, The Moor’s Pavane, is being performed all over the world.

Premiered in 1949, The Moor’s Pavane remains one of the greatest works of 20th Century modern dance and has been staged for major international companies, including the Paris Opera Ballet and the Royal Danish Ballet, and remains a staple of the New York-based Limón Dance Company.

Following its performance at Bard College, American Ballet Theatre will include the work in its October New York City Center season. The Moor will be danced by Marcelo Gomez, his wife by Julie Kent, his friend by newly named principal Corey Stearns, and his friend’s wife by Veronika Part.

sjDANCEco in San José, Ca., performed The Moor’s Pavane in its September season. Celebrating its 10th anniversary, the company is founded and directed by Gary Masters, who has been associated with the Limón organization since 1969 as dancer, artistic associate, reconstructor, director of the Limón West Dance Project and the Limón Dance Company’s San José operations.

French company Ballet Nice Méditerranée, under the direction of Eric Vu-An, included The Moor’s Pavane in their fall season, staged by Jennifer Scanlon.

Bayerisches Staatsballett, The Munich-based company directed by Ivan Liska, will include the work in its November season, staged by Sarah Stackhouse.

The Moor’s Pavane has been cited around the world as José Limón’s greatest masterpiece.  Jennifer Dunning of The New York Times remarked that The Moor’s Pavane was created more than a half century ago, but passing time and fashion have not diluted its power.”