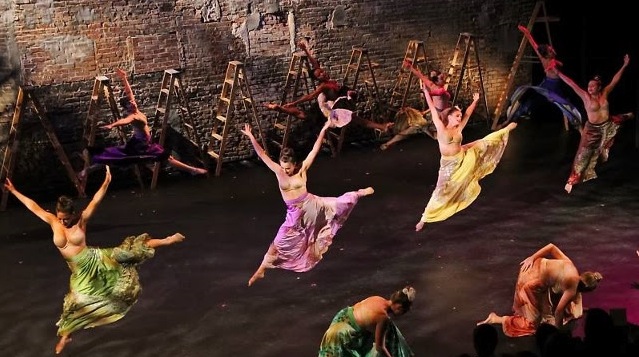 The 20th annual Modern Atlanta Dance (M.A.D.) Festival takes the stage next month at the Balzer Theater at Herren’s for two nights of exceptional dance. Designed by Douglas Scott and Full Radius Dance to showcase the diversity and excellence of the local dance scene, the M.A.D. Festival strives to present the best of Georgia’s modern/contemporary dance, allowing audiences to experience a variety of choreographers, techniques and artistic visions in a single evening.

SWADance Collective from Valdosta returns for their second festival appearance with the work a strange(r) fare. Choreographer Sarah Wildes Arnett’s work is an emotional duet based on a dinner table conversation that a couple has over and over again.

Project 7 Contemporary Dance, last seen on the festival stage in 2010, will perform In This Shirt, representing the process of carrying unique burdens both as individuals and as women. Choreography is by company Founder and Director Cherrise Wakeham, a 2010 Capezio A.C.E. Awards finalist.

New to the festival this year is: Atlanta Dance Connection in Allyne D. Gartrell’s House of Transition, with choreography utilizing Horton technique and classical ballet to explore the transition between movement, space and energy; Sablon by choreographer Christen S. Weimer, who was inspired by Nietzsche’s words “And those who are seen dancing were thought to be insane by those who could not hear the music”; meadow by a train, a work by Emily Cargill that explores the concept of a misconceived identity; and choreographer Anicka Austin’s new work Heidegger, which looks at the presence-absence theory.

Over the last 20 years, 65 different companies and independent choreographers have graced the M.A.D. Festival stage. The event is offered to the participating companies/artists free-of-charge – no application fee and no participation fee.  Full Radius Dance covers the theatre rental, the technicians and so on. Over the last two decades, Full Radius Dance has provided more than $27,000 in honorariums.

The 2014 M.A.D. Festival will be held on March 14 and 15 at 8 p.m. at Balzer Theater at Herren’s, located at 84 Luckie Street, NW, Atlanta, GA. For more information, visit fullradiusdance.org.