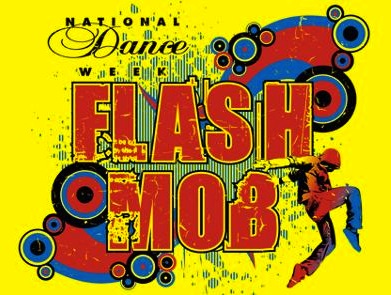 On Saturday, April 27, the National Dance Week Foundation (NDWF) will host the 2nd Annual Flash Mob Event. To celebrate how dance is part of life, and how it can be part of every person, NDWF encourages every city and town in the U.S. to “get up and dance!” Officials are asking dance studios and independent dancers to stage an NDW-themed flash mob on April 27 in their cities.

A flash mob is when a predetermined group of people show up in a public place and breakout into a choreographed dance, whether all at once or gradually over a song or period of time. In recent years flash mobs have become more popular, and almost always, they are later posted on YouTube, where more people can appreciate these people bringing dance and energy to what would otherwise be a run-of-the-mill public place. As NDWF points out, it is “totally cool and is a real attention grabber. And anybody can do it!”

To bring dance to the forefront of the public eye for National Dance Week, NDWF is asking dancers and dance-fans alike to get together across the country for flash mobs. Offering official event t-shirts so participants are matching, NDWF said dancers can easily access and learn the choreographed routine online. This way participants will be doing the same choreography all across the country in shopping malls, train stations and grocery stores.

“It’ll be all that YouTube and Facebook will be able to talk about! And therein lies the goal… bring the fun, engaging, anybody-can-do-it attitude about dance to the general public,” stated the NDWF website.

NDWF encourages dancers to rally their dance schools, troops and teams, and urge all their friends, family members and neighbors to participate. To find out how to get involved or to lead a flash mob in your area, visit www.nationaldanceweek.org/flash-mob.

The choreographer for this year’s flash mob routine is Sarah Jo Fazio, a commercial choreographer and dance teacher who currently lives in New York City. She most recently choreographed the UDMA fashion show and was seen on the CBS morning show. She has served as co-choreographer and artistic consultant on the Las Vegas show Bite for Molyneux Entertainment as well as choreographed the Carman Heart of a Champion Tour that premiered on Pay Per View and the Dino Christmas Spectacular that aired on QVC. Fazio, who has choreographed and directed Six Flags productions all over the country, is also known for choreographing half-time shows for the New York Knicks, San Antonio Spurs and the Oklahoma City CAVS.

National Dance Week runs April 26 to May 5, 2013. For more information on how to “celebrate dance and promote fun fitness” visit the NDWF website. The deadline for ordering flash mob t- shirts with a studio or group name on the back is April 9.

Also, as part of NDWF’s 2nd Annual Flash Mob Event, dancers can enter a contest to become the flash mob model. Rio Soul Shoes is sponsoring a special model search, specifically looking for groups of 9 – 15 people aged teens to early twenties. Each member of the winning group will receive a pair of Rio Soul Alegria Shoes and then the group will be treated to a photo shoot to come up with dance images for Rio Soul’s new campaign. Visit www.riosoul.com to find out more.