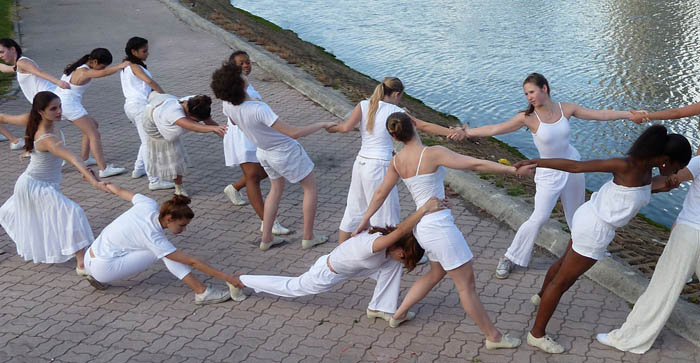 Students at universities, private dance schools, elementary schools and dance companies, from the University of Alaska to Miami Dade College in Florida, from the Dance Engagements Company in California to Bates College in Maine, will unite on Saturday, April 12 in a simultaneous, site-specific dance at a river, a bay, a lake, the ocean or any water site near to them.

This spectacular celebration of arts in action is designed to initiate a national “water ethic” in the U.S. – one that can inform and inspire both participants and audience members to take responsibility for conserving and protecting the water that they use and enjoy.

National Water Dance began in 2011 as a local event, initiated by the New World School of the Arts in Miami, Florida to bring attention to the power and fragility of Florida’s waterways. Under the guidance of Artistic Director Dale Andree and Producer Daniel Lewis, National Water Dance, in less than three years, has grown to a national event involving more than 70 institutions in 30 states around the country. Participants experience dance as a form of social activism, an opportunity to be part of a movement choir that creates social change through art.

An idea first conceived by Rudolf Laban, a movement choir is a community of people dancing together for a common purpose. Performances often take place outdoors, in celebration of the environment, and audience members are frequently invited to join the dance.

The event directors, based in Florida, will connect through the internet, sharing movement phrases and gestures with participants around the U.S. These movements will be the common source from which a dance phrase will be created.

For more information about participating in the 2014 National Water Dance event, contact Dale Andree at dandree@nationalwaterdance.org.

As of January, the following institutions are participating in the National Water Dance (the list is organized in alphabetical order by state):

Midway Elementary School of the Arts

New World School of the Arts

Arthur and Polly Mays 6-12 Conservatory of the Arts

University of Louisiana at Monroe

JMW High School for the Performing and Visual Arts

Sewanee: The University of the South

The Governors School for the Arts

Cornish College of the Arts