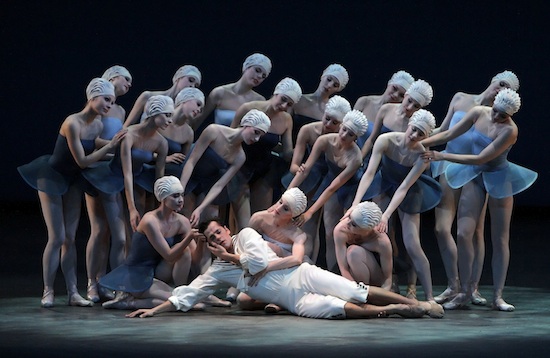 New York City Ballet will open its 2013-14 season on Tuesday, September 17 with six performances of Peter Martins’ full-length production of Swan Lake. Set to Tschaikovsky’s score and featuring sets and costumes by the acclaimed Danish painter Per Kirkeby, the production was last performed by NYCB in the fall of 2011 to sold-out houses.

The fall season will continue through Sunday, October 13 with performances of 17 additional ballets, including works by George Balanchine, Jerome Robbins, Peter Martins, Mauro Bigonzetti, Alexei Ratmansky and Christopher Wheeldon, as well as world premiere works by Benjamin Millepied, Justin Peck and Angelin Preljocaj, which will premiere at a special one-time-only gala performance on September 19.

The final three weeks of the fall season will include five different programs. Highlights include an all-Balanchine Black & White program consisting of The Four Temperaments, Episodes, Duo Concertant and Symphony in Three Movements; an all-Balanchine Short Stories program consisting of La Sonnambula, Prodigal Son and Slaughter on Tenth Avenue; a Contemporary Choreographers program consisting of Christopher Wheeldon’s Soirée Musicale, Alexei Ratmansky’s Namouna, A Grand Divertissement and the Preljocaj world premiere; and a final program that will feature Mauro Bigonzetti’s Vespro, created for NYCB in 2002 and last performed in 2003, Balanchine’s Duo Concertant and Jerome Robbins’ Dances at a Gathering.

The fall will also feature a special program designed for family audiences, which will be highlighted by the return to the repertory of Wheeldon’s Carnival of the Animals, created in 2003 and last performed by NYCB in 2005. Set to the score by Camille Saint-Saëns, the production features a narration written, and originally performed by the actor and writer John Lithgow. For the fall performances, the role of the narrator will be performed by stage and screen actor Jack Noseworthy, who along with Lithgow starred in the Broadway musical version of Sweet Smell of Success, which also featured choreography by Wheeldon. The family program, which will debut on Friday, September 27, will also feature Martins’ Jeu de Cartes, and Robbins’ The Four Seasons.

To see a complete schedule of programs or to book tickets, visit www.nycballet.com. The company’s 2013 Fall Gala will take place on Thursday, September 19 for one night only.