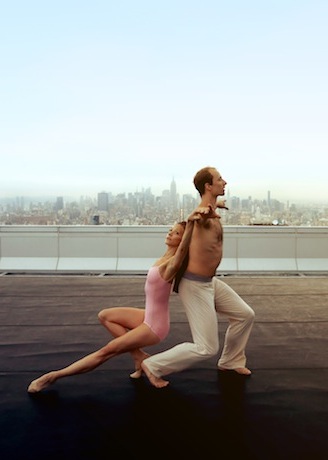 Following the 12th anniversary of 9/11, New York City Ballet has released New Beginnings, a short film that captures an extraordinary and moving performance of Christopher Wheeldon’s After the Rain. The film was shot during sunrise on the 57th floor terrace of Four World Trade Center in lower Manhattan.

With One World Trade Center (previously known as the Freedom Tower) and the iconic New York City skyline as a backdrop, two NYCB Principal Dancers, Maria Kowroski and Ask la Cour, perform an excerpt from Wheeldon’s poignant pas de deux as dawn signals the beginning of a new day in New York City.

Created as both a testament to the resilience of the human spirit, and a tribute to the future of the city that New York City Ballet calls home, New Beginnings was released worldwide at sunrise (6:34 a.m. EST) today, Thursday, September 12, on the New York City Ballet YouTube channel.

“Like the rest of the world, everyone at New York City Ballet was deeply affected by the events of 9/11. Now, 12 years later, as a revitalized World Trade Center site begins to re-emerge, the New York City Ballet would like to offer this film as a gift to our great city,” said NYCB Ballet Master in Chief Peter Martins.

“Dance really is a powerful universal language, and the New York City Ballet is deeply honored to be able to present this remarkable and touching performance of Christopher Wheeldon’s After the Rain to people both here in New York, and all across the globe.”

According to Martins, the company was on a European tour going from Edinburgh, Scotland, to Athens, Greece, and finally to Parma, Italy on the tragic day of September 11, 2001. Finding themselves in Italy when the news broke of the awful events at home in New York, the company was overwhelmed with a sense of fear and loss.

New York City Ballet, which was scheduled to perform as part of the Verdi Festival at the Teatro Regio that evening, ultimately decided to cancel that evening’s performance.

“While we had come to Italy to dance, there were still so many questions about what was happening in New York, and still so many family members and friends unaccounted for, that it was simply not possible to ask the dancers to perform that evening,” said Martins.

What happened next was a testimony to the beauty of the human spirit, as that evening the entire sold-out audience arrived at the Teatro Regio and stood in silence to mourn with the company and the rest of the world. Martins addressed the crowd to say that while the company could not perform that evening, New York City Ballet would be back the next night.

“We came here to dance, it is what we do, but our hearts are breaking and it is simply not possible for us to perform this evening,” said Martins from the stage of the theater. “But we will be back tomorrow, and we will be honored to perform for all of you then,” he said.

NYCB did perform at the Teatro Regio the following evening, September 12, 2001, and now 12 years to the day, New York City Ballet offers New Beginnings, which features an international team of collaborators, including director Davi Russo, who was born and raised in New York City.

New Beginnings can be watched on the New York City Ballet YouTube channel at www.YouTube.com/nycballet.