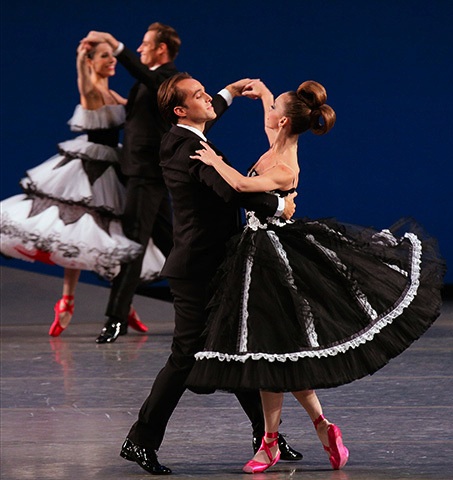 New York City Ballet’s annual Fall Gala will once again celebrate ballet and fashion with a program that will include three world premiere ballets as well as existing works by Peter Martins and Christopher Wheeldon, all featuring costumes designed by an international roster of some of the fashion world’s most renowned talents. The exclusive gala will take place the evening of Tuesday, September 23, opening NYCB’s four-week Fall Season at the David H. Koch Theater at Lincoln Center.

The evening will also feature Peter Martins’ 2001 work Morgen, with all-new costumes by the world-renowned luxury womenswear designer Carolina Herrera, as well as Christopher Wheeldon’s This Bitter Earth, which premiered at the company’s 2012 Fall Gala featuring costumes by the legendary couturier Valentino Garavani.

Sarah Jessica Parker, the actress, producer and philanthropist who is a Vice Chair of the NYCB Board of Directors, will serve as a chairman for the event for the third consecutive year. She has been instrumental in bringing together the worlds of ballet and fashion. Other chairmen for the 2014 Fall Gala include jewelry artist Cindy Chao, fashion advertising executive Trey Laird and his wife Jennifer, and JPMorgan Chase & Co. Chief Financial Officer and NYCB Board Member Marianne Lake.

The festivities will begin with a champagne reception at 5:30 p.m., followed by a 7 p.m. performance, and will conclude with a stylish black-tie supper ball. For more information or to reserve tickets, visit nycballet.com or call 212-496-0600.