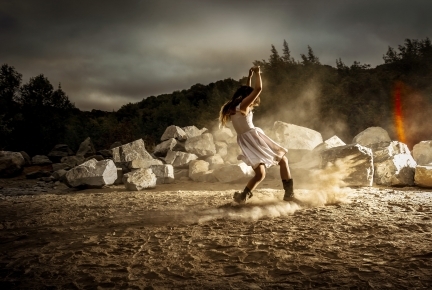 San Francisco-based contemporary dance company ODC/Dance will celebrate its 43rd season on March 20–30 with the world premiere of boulders and bones, an epic work inspired by the creations of visual artist Andy Goldsworthy that includes collaborations with Zoë Keating, Alexander V. Nichols and RJ Muna.

The choreography will be split between two programs. Program A will premiere boulders and bones on March 20, 21, 26, 28 and 30. The work is set to a commissioned score that will be performed live by acclaimed avant cellist Zoë Keating. Way and Nelson’s fearless choreography will touch on transformation in both art and nature. RJ Muna’s photographic mise en scene, which traces the shifting light, changing landscape, and building process of Goldsworthy’s installation, takes us through the chaos of creative process to the clarity of completion.

Program B will present the works Two if by Sea, Triangulating Euclid and Unintended Consequences: A Meditation on March 22, 23, 27 and 29. Okada’s Two if by Sea is inspired by clandestine physical languages and codes. It is a rhythmic, physical duet spiced with tap, delightful partnering and a wink of humor. The 2013 work Triangulating Euclid is a highly physical and emotive piece that moves from the formal elegance of geometry to its human implication. Lastly, Way’s Unintended Consequences: A Meditation shines a critical light on the current state of political affairs and our inadvertent complicity in them.

In addition, OCD/Dance will present its annual Gala Celebration and After-Party on Thursday, March 20 alongside the opening night performance. All performances and events will be held at the Yerba Buena Center for the Arts (YBCA), located at 701 Mission Street in San Francisco. For more information, visit www.odcdance.org. Tickets are now available.