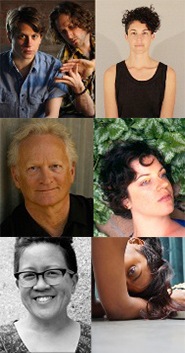 The Margaret Jenkins Dance Company (MJDC) recently announced the recipients of the 2015 CHIME (Choreographers in Mentorship Exchange) grants in Southern California. With CHIME, artists will work in mentor-mentee pairs from now through June.

The mentor-mentee pairs for 2015 CHIME in Southern California are (with mentor/s listed first): Brennan Gerard and Ryan Kelly with Rebecca Bruno; Robert Een with Alexx Shilling; and Carole Kim with Meena Murugesan.

An advisory panel of regional specialists in the dance field reviewed the proposals and selected the CHIME grant recipients. The Southern California panel consisted of Victoria Marks, a choreographer who makes live and filmed work, dances for dancers and other human beings, and is a professor in the Department of World Arts and Cultures/Dance at UCLA, and Wendy Rogers, who has choreographed and performed contemporary dances for over 40 years, residing in the San Francisco Bay Area, New York City and now in Riverside, California where she joined the University of California dance faculty in 1996.

Reflecting on five years of CHIME in Southern California, Margaret Jenkins of MJDC stated, “CHIME is a program with a huge mission and an enormous heart. Having witnessed and facilitated the powerful personal connections that artists have established through CHIME over the last decade, I am so pleased that CHIME in Southern California will have another six months for artists to be in conversation and at work with one another.”