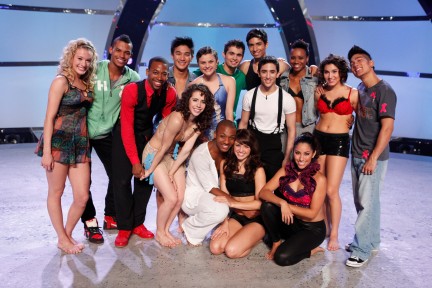 Wadi Jones, Iveta Lukosiute, Missy Morelli and Nick Young eliminated on So You Think You Can Dance.

After last week’s unprecedented save, finalists Wadi Jones, 24, a Breaking dancer from Ossining, NY; Iveta Lukosiute, 30, a Ballroom dancer from Klaipeda, Lithuania; Missy Morelli, 20, a Jazz dancer from Arvada, CO; and Nick Young, 19, a Tap dancer from Franklin, WI, were eliminated on last night’s So You Think You Can Dance.

This week’s results show featured performances by Rage Crew and electro-hip-hop recording duo LMFAO with hip-hop dance crew Quest Crew. It was also announced tonight that the winner of So You Think You Can Dance will appear in a Gatorade print ad campaign and will be featured as a G Series FIT Team Athlete online, in addition to being crowned America’s Favorite Dancer and winning the $250,000 cash prize.