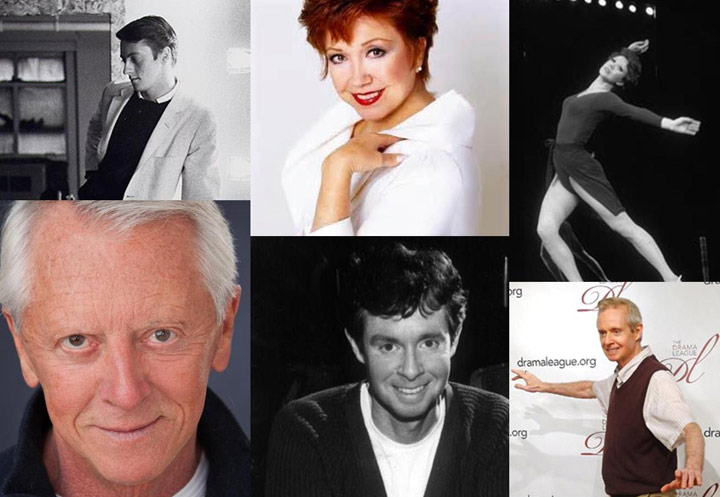 Mark your calendars for the next Artists Talk hosted by Steps Beyond on Saturday, January 24 at 7 p.m. Titled “Hear It From The Pros,” this Artists Talk will be a discussion on working in the business of Broadway, featuring three stars who have enjoyed successful and long-term careers.

Donna McKechnie, Grover Dale and Randy Skinner will share fascinating stories and information about their years on Broadway and in TV, film and cabaret. They will discuss how to thrive, survive and stay relevant in a competitive and ever-changing business. The artists will also take questions, and a reception will follow.

The first artist, Donna McKechnie, went down in musical theatre history in 1976 when she received a Tony Award for the role of Cassie, a character based in great part on herself, in A Chorus Line. McKechnie has sung for Stephen Sondheim, acted for Hal Prince, hoofed for Bob Fosse and even appeared in a regular role on the Gothic TV soap opera Dark Shadows. Her rich and extensive biography includes appearing on Broadway and London’s West End in Promises-Promises, Company, Can-Can, On the Town, How to Succeed…, A Funny Thing… and Follies, to name just a few.

Plus, McKechnie has appeared on the concert stage, with symphony orchestras and in supper clubs with her award-winning one-woman musical My Musical Comedy Life. Her memoir, Time Steps – My Musical Comedy Life, was published by Simon and Schuster. Most recently, she has created the staging for a production of Six Lessons in Six Weeks, starring Leslie Caron, and co-starring in 4 Girls 4, with Andrea McArdle, Maureen McGovern and Faith Prince.

The second artist, Grover Dale, first came to New York on a bus from McKeesport, Pennsylvania with only $130 in his pocket and a passion to dance. He made his Broadway debut in the 1956 musical Li’l Abner, appeared as one of the Jets in the original cast of West Side Story, understudied Anthony Perkins in Greenwillow, had the juvenile lead in Noel Coward’s Sail Away and was featured in Half A Sixpence, all on Broadway. His film credits include a featured role in The Unsinkable Molly Brown, Half A Sixpence and The Landlord.

The third artist, Randy Skinner, is a director, choreographer and performer whose work has been seen on Broadway, in national and international tours, and in regional theaters. As a Broadway performer, he appeared in A Chorus Line, Gypsy, Dames at Sea, Hello Dolly, Pal Joey, High Spirits, Once More with Feeling, Walking Happy and Babes in Arms, directed by Ginger Rogers. Skinner’s choreography for one of Broadway’s greatest hits, 42nd Street, was rewarded with nominations from the Tony, Drama Desk, Outer Critics and Astaire committees. Other choreographic credits include Do Re Mi, Of Thee I Sing, Face the Music and No No Nanette (all presented by City Center Encores!), Lucky in the Rain, George M and Babes at Arms (all at Goodspeed Opera House), Ain’t Broadway Grand (on Broadway), Stormy Weather (with Leslie Uggams/Pasadena Playhouse), Puttin’ On the Ritz (Kennedy Center) and the current touring production of White Christmas. His awards include the LA. Drama Critics Award, the L.A. Dramalogue Award, the Connecticut Critics Award and the Cleveland Times Theatre Award.

Don’t miss your chance to hear from these Broadway greats in person! Visit www.stepsnyc.com for more information. Call 212-874-2410 x 127 for reservations.