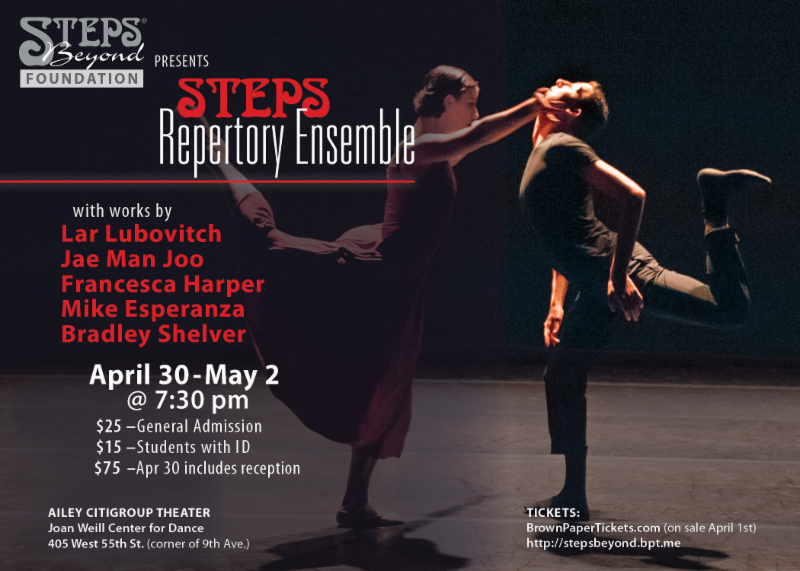 Under the artistic direction of Bradley Shelver, the Steps Repertory Ensemble is the contemporary dance company of Steps Beyond Foundation, a nonprofit in residence at New York’s Steps on Broadway. The Ensemble, which commissions established and emerging choreographers to create new works and to restage repertory, will soon present its spring season. Across three different programs, the company will perform works by Shelver, Mike Esperanza, Francesca Harper, Jae Man Joo and the award-winning Lar Lubovitch.

Featuring two world premieres, performances will be presented on April 30-May 2 at the Ailey Citigroup Theater in New York.

The first program, set for Thursday, April 30 at 7:30 p.m., will present Man Joo’s Recur, Lubovitch’s The Legend of Ten and Shelver’s Him and Her. It will also present the world premiere of Shelver’s Le Monde Est Fini, Pas De Panique, translating as “The World is Finished, Do Not Panic.” The work references the influence and power of mass hysteria and panic in the modern world. Shelver comments on the era of suspicion, mass media, war, the death of romance, and the disconnection of mankind from each other, while at the same time recognizing the increased connection we share through social networking.

The second program on Friday, May 1 at 7:30 p.m. will re-present Shelver’s new work and The Legend of Ten. Then it will introduce Shelver’s She and Him, Him and Her, He and I, Us and Them and the world premiere of Sandscript by Esperanza, the REVERBdance Festival commission winner. Esperanza’s music is “Die Luftseilbahn” and “Bird Watching” by contemporary Norwegian composer Biosphere.

The third program on Saturday, May 2 at 7:30 p.m. will re-present Recur, SandScript, He and I and Le Monde Est Fini, Pas De Panique, plus Apex by Harper and 3114 BCE by Shelver.

Tickets are $25 for all programs, or $15 with student ID. The opening event on April 30 also offers a $75 ticket, which will include entrance to a reception following the performance. For reservations, visit www.brownpapertickets.com. For more information, visit www.stepsnyc.com.