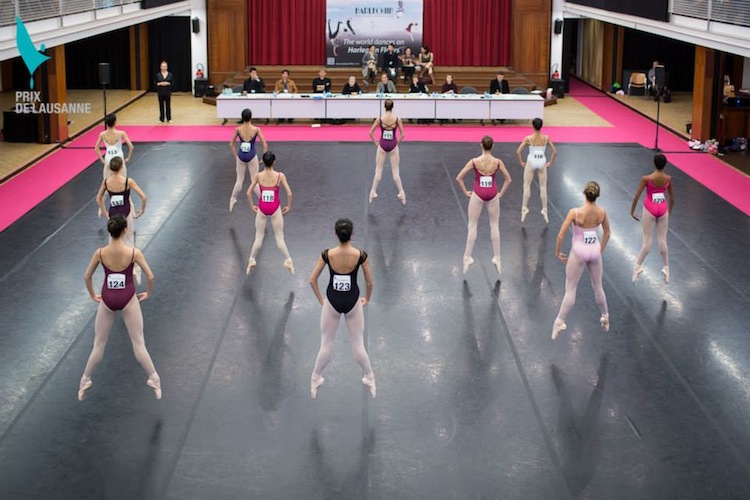 The 2014 Prix de Lausanne kicked off on Monday and runs through Saturday, February 1, in Lausanne, Switzerland. The 42nd international ballet competition is hosting 71 selected young dancers from around the world after a total of 295 candidates representing 35 different nationalities originally applied.

On the first day, January 27, the male and female candidates separately took contemporary classes and completed run-throughs of classical variations.

On the second day, January 28, the dancers had contemporary class and coaching all day before attending the evening Daily Dance Dialogue. The dialogue presented Peter Lewton-Brain, osteopath at the Academie de Danse Princesse Grace in Monte-Carlo and director of the Dancer’s Health Clinic at the École Supérieure de Danse Cannes.

The classical and modern classes are being taught by renowned teachers Stephanie Arndt, Patrick Armand and Duncan Rownes. In the coaching sessions, candidates are receiving one-on-one advice and tutoring in the variations they have chosen to perform. This year’s classical variations are being coached by Monique Loudieres and Patrick Armand while contemporary variations are being coached by Nancy Euverink, assistant to Jorma Elo, Ayako Nakano, assistant to Richard Wherlock, and Goyo Montero.

On Wednesday and Thursday, January 29 and 30, dancers will have more classes, coaching sessions and run-throughs. On Wednesday, the Daily Dance Dialogue will feature dance celebrity Julio Bocca and on Thursday, it will present prima ballerina Alessandra Ferri. These dialogues are open to the public and free to attend.

The semi-finals of the competition featuring the classical and contemporary variations will be on Friday, January 31. Following these selections, 20 chosen finalists will perform their variations in front of the jury on Saturday, February 1. Both the semi-finals and finals will be performed before an audience in addition to the jury. Tickets are now on sale.

The finals also include a half-hour Interlude performance given by special guest artists. This year, the Prix de Lausanne welcomes the Staatstheater Nürnberg Ballett as well as two principal dancers from Ballett Zürich – Katja Wünsche, Prix prize winner in 1998, and William Moore.

The finals on Saturday will be streamed live on the Internet at www.prixdelausanne-live.com. Of the candidates participating in the finals, only six will be awarded a one-year scholarship with one of the prestigious Prix de Lausanne partner schools or companies.

For more detailed information on the schedule, candidates and participants of the 2014 Prix de Lausanne, visit www.prixdelausanne.org.

To go behind the scenes, check out the competition’s video blogs at the Prix de Lausanne website. So far this year, Maria Clara, Marinha Coelho, Michael Ryan, Daniel Rodriguez Domenech and Wu HuaHua are talking about their experiences.

Dance Informa wishes all of the 2014 candidates good luck!