‘The Art of Falling’ premieres in Chicago 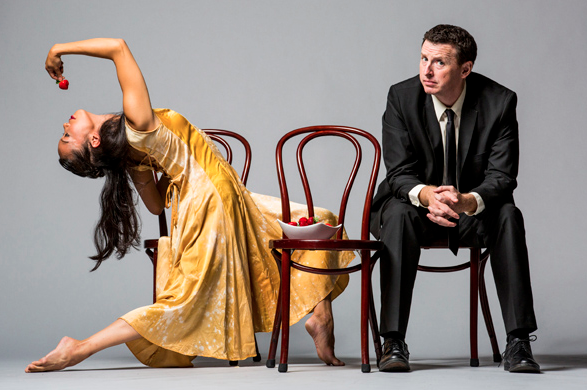 A special team has come together to create an all-new, full-evening production merging contemporary dance with improv and sketch comedy. Presented under the leadership of Hubbard Street Artistic Director Glenn Edgerton, CEO/Executive Producer of The Second City Andrew Alexander, and Executive Vice President of The Second City Kelly Leonard, The Art of Falling will have its world premiere this week in Chicago.

This unprecedented and collaboratively devised production was first announced in February 2014 at The Second City. Helmed by Jeff Award–winning director Billy Bungeroth (The Second City Guide to the Opera) and employing the largest creative team in Hubbard Street’s 37-year history, The Art of Falling opens today and runs through Sunday (October 15–19) at the Harris Theater for Music and Dance in Millennium Park, launching Hubbard Street’s 2014–15 home season.

Edgerton said, “Everyone’s asked me to define this collaboration and my answer is, quite simply, ‘You have to see the premiere.’ I can say it will include some touching moments, some profound moments — and a lot of truth, which underlies all humor. I’m proud that, here at Hubbard Street, we’re open enough, willing enough, and have a company ready to embrace a project like this. It’s been thrilling to watch Billy Bungeroth and our incredible creative team put it all together.”

Leonard commented, “The improvisation that Hubbard Street practices and the improvisation that The Second City practices is the reason that we’re able to accomplish this project at all. The Art of Falling is also, quintessentially, a Chicago thing. There’s an aspect of civic pride in collaboration. Chicago is ‘The City That Works.’ It’s been fun, it’s been enlightening — and it doesn’t end here. Our hope is that we’ve started a conversation that can continue. We hope The Art of Falling inspires other organizations to find new and interesting ways to collaborate.”

For more information, watch the “inside the studio” trailer below or head to www.hubbardstreetdance.com. Hubbard Street and The Second City present The Art of Falling at the Harris Theater for Music and Dance in Millennium Park, located at 205 E. Randolph St. in Chicago.