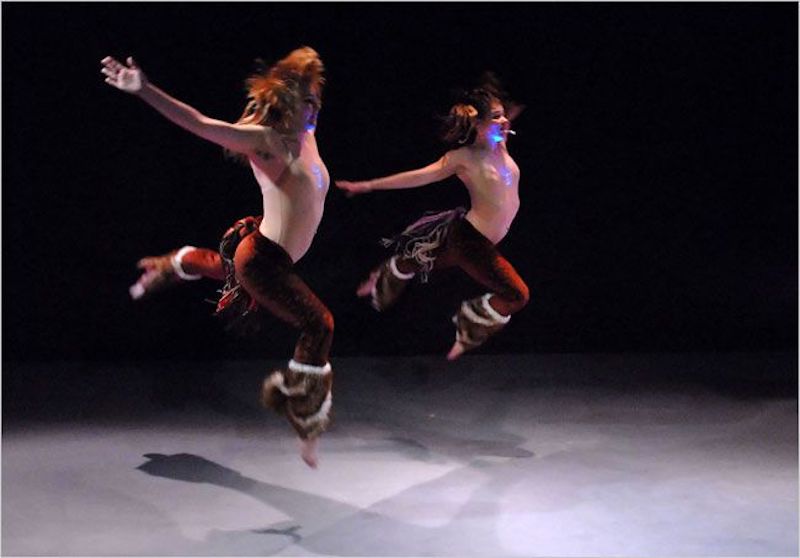 The Bang Group presents POP Performance: Women in Motion from Thursday, January 30 to Saturday, February 1 at 8pm at The Theater at Gibney, 280 Broadway (entrance at 53A Chambers).

The Centaur Show is a nouveau New Age fantasy death metal poperetta about two centaurs on an interstellar voyage to save their (non) binary star system from imminent supernova. Originally created by artists Katy Pyle and Eleanor Hullihan in 2007, 13 years later the pair return to their former personae as they look back on all the ways their world has already imploded,  and stop to put on latex gloves to pick up the crystal shards of what remains. Featuring original live music, costumes, video and choreography by asubtout.

The Oak and The Willow is a new duet choreographed by Rebecca Stenn and performed by Stenn and dancer Quinn Dixon. The original, commissioned live music score is composed and performed by Jay Weissman on electric bass. The Oak and The Willow is a painterly exploration of the movement of color and brushstroke, and creates a continually unfolding and evolving visual canvas on stage. Costumes are created collaboratively by Stenn and Dixon.

Against the familiar yet anonymous backdrop of an IKEA store, the young Sámi protagonist of Same As Sister’s “Kallax” will go on a journey of ascent into American celebrity. Performer, Kristina Hay, joined by the supporting cast of Leigh Atwell, Hilary Brown-Istrefi, Briana Brown-Tipley + Jamie Robinson, will encounter the aspirations, expectations, fears, and consumptions of our contemporary society.

Image courtesy of The Bang Group