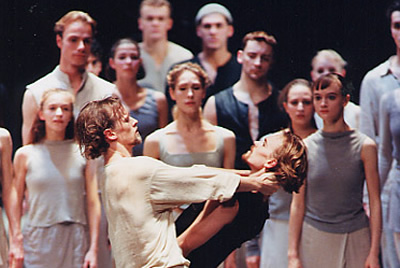 The Hamburg Ballet, led by American choreographer John Neumeier since 1973, will present the full-length production Messiah at the Hamburg State Opera in Germany just in time for Good Friday and Easter Sunday on April 18, 20, 24, 26 and 29, as well as  July 5.

Messiah, choreographed by Neumeier, had its world premiere in Hamburg on November 28, 1999. Since then, the work has been a signature piece for the company. It follows the story of Jesus Christ, his birth, his life and ministry and his ultimate sacrifice for all mankind. It is set to powerful and poignant scores by Georg Friedrich Haendel and Arvo Pärt.

“Handel’s oratorio depicts not only the Passion of Jesus Christ, but also deals with the suffering of all mankind long before the appearance of a savior,” says John Neumeier. “It cites a number of prophecies that predict these rescuers, it tells the story of His birth, His ordeal, His ascension. It describes the disciples spreading His word around the world and the rejection of this word. It speaks of the punishment for those who deny the word, and the joy of the believers.”

For many choreographers and dance companies, producing a ballet related to faith, religion and personal beliefs might be too risky. Yet, Neumeier has never backed away from this challenge. Over the years, sacred music has inspired a number of his choreographic works.

In 1981, Neumeier first choreographed Saint Matthew Passion. Not only was this ballet a turning point in his creative work, but it became a kind of “signature” piece for his company and was shown throughout the world in more than 25 cities from New York to Tokyo. Six years later, Neumeier created Magnificat for the Paris Opera, which premiered at the Festival of Avignon.

Messiah is two hours and 30 minutes in length and includes one intermission. The Hamburg Philharmonic State Orchestra and a choir of singers will perform the music live. For more information or to book tickets, visit www.hamburgballett.de.