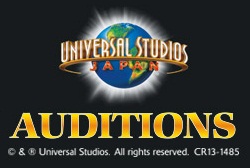 The Senior Vice President of Universal Studios Japan®, Mr. Mike Davis is now calling Utah home and has arranged his audition team to include Salt Lake City as one of the 10 citiesthey visit on the world wide audition tour!

Universal Studios Japan® are Casting Singers who can move and Dancers who can sing, Stunt performers, Female Ballet dancers a wide variety of character actors. They cast for a variety of shows within the park including Universal Monsters Live Rock and Roll Show™ and the Terminator 2 : 3-D® show to name a couple.

Mr. Davis said, “[I’m] thrilled to be kicking off the tour in Salt Lake as it has a growing reputation on the world stage for a city that producers talent from a variety of disciplines. I look forward to welcoming talent from Salt Lake and other states of the USA to be a part of one of the world’s greatest theme parks.”

Universal Studios Japan is known on the world stage of theme parks as the premium property to work with, mainly due to the exceptional level of talent they hire and the working and living conditions provided to anyone lucky enough to land a contract.

The world audition tour manager Jaci Testro says, “this is due largely to the fact that everyone on the panel inside and out have all been successful performers and use their collective experience to support and nurture current and future talent. They always make it a priority to take the time to see what each performer has to share.”

2012 auditionee Jacinta said, “I would just like to commend and thank the entire Universal team for the awesome experience I had on Wednesday, at the auditions in Sydney. You were all so lovely and warm, and it made the tiring day a little easier to get through! The dance audition was such a fun atmosphere to be in, and it was one of the most professional and organized auditions I have been too. From the experience I’ve had with you all this year, you can guarantee I’ll be back next year!”

So if you can Sing, Dance or Act check out their audition website www.universalauditions.com/japan. Have a look around, and do your homework. If you think you fit the bill, then make sure you apply ASAP so as not to miss this unique opportunity.