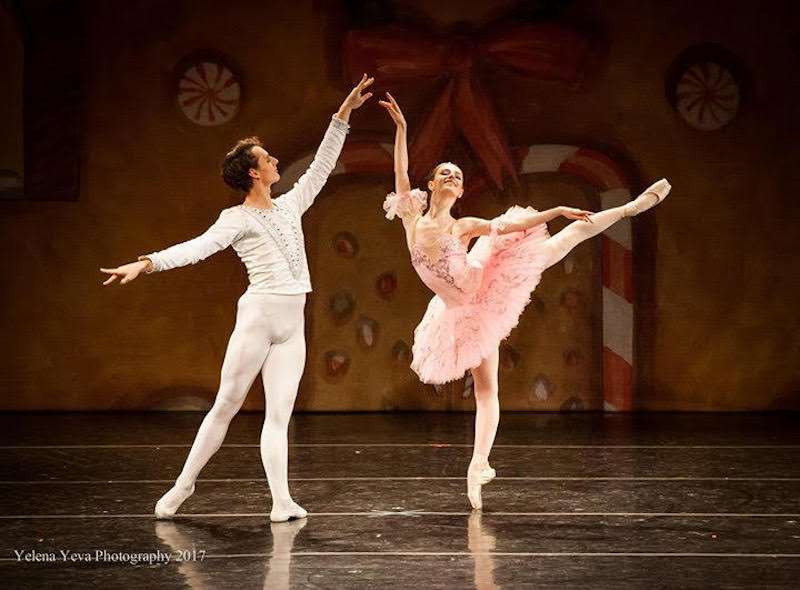 This year’s production will star Hungarian dancer Rajna Removic and Justin Valentine as her Cavalier.   Ms. Removic currently trains at the Hungarian Dance Academy in Budapest and with Valentina Kozlova; Justin Valentine had the honor, at the Valentina Kozlova International Ballet Competition in April 2016 in NYC, of receiving a one-year scholarship to the Vaganova Ballet Academy in St. Petersburg, selected by director and VKIBC judge Nikolai Tsisaridze.

Other dancers will be drawn from Kozlova’s ballet school, where her teaching method combines the Bolshoi School with Balanchine methods of training, and the cast includes several remarkable young dancers who have won medals in ballet competitions around the world.

The production is ALL-DANCE, and opens with the Snow Scene, continuing into the Act II divertissements, including the Waltz of the Flowers, the Sugar Plum Fairy and her Cavalier, the Russian, Chinese and Arabian dances, and more – all danced to the beloved music of Tchaikovsky.    Kozlova, a former principal dancer with the Bolshoi Ballet and New York City Ballet, has staged these dances after the original by Marius Petipa and Valery Vainonen (formerly with the Kirov Ballet).

Valentina Kozlova was trained at the Bolshoi Ballet School, graduated into the Bolshoi Ballet Company and soon rose to the rank of Principal Dancer.   She was the youngest dancer ever to dance the role of Juliet, and appeared in principal roles until 1979, when she defected while the Company was on tour in Los Angeles.   The ballerina guested with companies around the world, starred on Broadway in “On Your Toes,” and joined New York City Ballet as Principal Dancer, at the invitation of George Balanchine, remaining with that company until 1995.   With Margo Sappington, Kozlova directed her own Ballet: The Daring Projects for several seasons, and also became coach and judge for ballet competitions around the world.  Kozlova directs her own school located in magnificent studios in Norwalk, Ct. as well as the Valentina Kozlova International Ballet Competition, presented twice in Boston and seven times in New York.  The 10th VKIBC is scheduled for March 15-20, 2020 at Symphony Space, NYC.  The 2020 celebration includes both the 10 anniversary of VKIBC, and is also the 40th anniversary of the defection from the Bolshoi Ballet of Kozlova and her then husband Leonid Kozlov, who will come from his home in Aruba to rejoin Valentina on stage, along with other special guests.