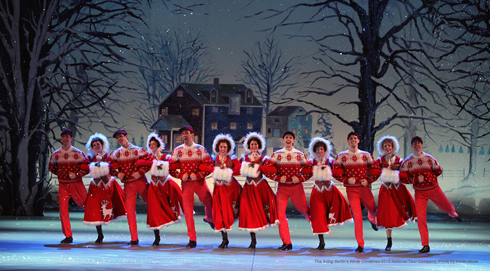 Just in time for the holidays, the national tour of Irving Berlin’s White Christmas will come to The Music Hall at Fair Park in Dallas, Texas. The musical will run December 17-29, drawing audiences into the story’s picturesque Vermont inn and entertaining them with dancing, romance, laughter and some of the greatest songs ever written.

Following the same storyline as the 1954 American film of great acclaim, Irving Berlin’s White Christmas tells the tale of two showbiz buddies putting on a show in a Vermont inn, and finding their perfect mates in the bargain. Jam-packed with stellar dancing, comedy and festive songs, including “Count Your Blessings Instead of Sheep,” “Happy Holiday,” “Sisters,” “Blue Skies,” and the unforgettable title song, Irving Berlin’s White Christmas is a merry and bright experience for the entire family.

Described as a “a holiday card come to life” by New York Daily News, the musical White Christmas will star: Meredith Patterson, who played Peggy Sawyer in the revival of 42nd Street; David Elder, who was nominated for an Outer Critics and Astaire Award for playing Billy Lawlor in 42nd Street, and has played in Kiss Me Kate, Titanic, Damn Yankees, Beauty and the Beast, and Guys and Dolls on Broadway; James Clow, who performed in Peter Pan at Madison Square Garden; and Trista Moldovan, who received a Denver Ovation Nomination for playing Christine in The Phantom of the Opera on Broadway.

For tickets to Dallas performances, visit www.dallassummermusicals.org. This holiday classic is currently performing at the Des Moines Performing Arts in Des Moines, Iowa through December 15. For more information on the National Tour, go to www.irvingberlinswhitechristmas.com.