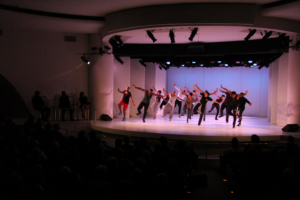 Alvin Ailey American Dance Theater, New York City Center’s Principal Dance Company, also return to the theater’s stage December 4th through January 5th for “Ailey Revealed,” presenting over two dozen diverse works, including world premieres that shine a spotlight on society – Ailey dancer and first-ever Resident Choreographer Jamar Roberts’ Ode offers a meditation on the beauty and fragility of life in a time of growing gun violence and choreographer Donald Byrd will use the 1921 Tulsa riots as a source of inspiration for Greenwood. The five-week holiday season also features company premieres by Aszure Barton and Camille A. Brown, and new productions by Judith Jamison and Lar Lubovitch. For info, visit: www.alvinailey.org

Works & Process at the Guggenheim

Described by The New York Times as “an exceptional opportunity to understand something of the creative process,” for 35 years, New Yorkers have been able to see, hear, and meet the most acclaimed artists in the world, in an intimate setting unlike any other. Works & Process, the performing arts series at the Guggenheim, has championed new works and offered audiences unprecedented access to generations of leading creators and performers. Most performances take place in the Guggenheim’s intimate Frank Lloyd Wright-designed 273-seat Peter B. Lewis Theater. In 2017, Works & Process established a new residency and commissioning program, inviting artists to create new works, made in and for the iconic Guggenheim rotunda.

Image courtesy of Works and Process