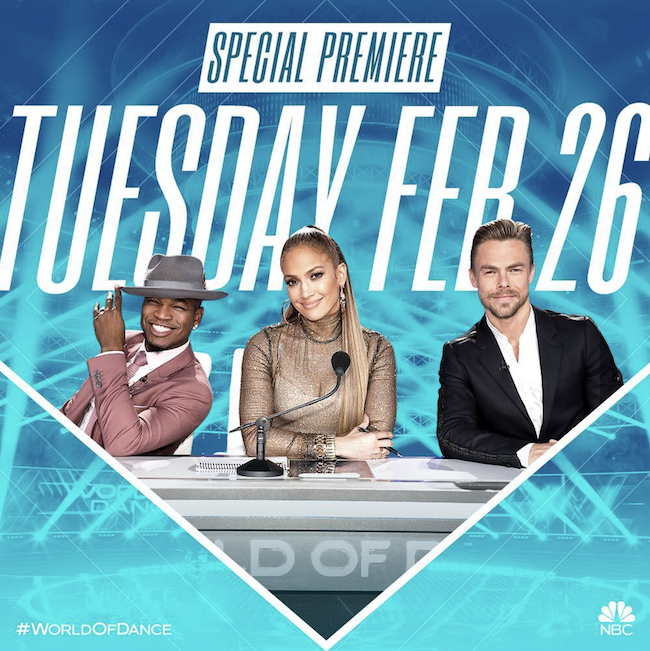 NBC’s hit dance competition series World of Dance has announced its 54 acts across multiple genres, ages and dance styles for Season 3. This season the competition is promised to be fiercer than ever with a new group of world-class competitors ready to showcase their talents to win a life-altering grand prize of $1 million (one of the highest prize amounts ever for a reality competition series).

World of Dance is led by a judging team of extraordinary dance superstars — Jennifer Lopez (who also serves as an executive producer), Derek Hough, NE-YO and host Scott Evans.

“This new season has some jaw-dropping performances and we’re seeing acts do stunts and moves that we’ve never seen before,” said Lopez. “I’m excited that we’re giving these gifted dancers and athletes an opportunity and platform to shine as brightly as they deserve, for an unparalleled third season in a row!”

To raise the stakes for Season 3, the score to get from The Qualifiers to The Duels is raised from an 80 to an 85. Then in The Duels, judges added a twist called Redemption, where the two highest-scoring acts that did not win their head-to-head routine get one last chance to compete for the final spot in The Cut.

Season 3 will highlight some of the most talented dancers and dance teams in the world including:

– Julian & Charlize – This hip-hop junior duo has danced alongside some of the biggest names in the industry. Charlize performed at the Super Bowl halftime show with Missy Elliott while Julian performed on Saturday Night Live with Pharrell Williams.

– Radiance – This all-female contemporary powerhouse team is choreographed by one of Jennifer Lopez’s dancers, Rudy Abreu.

– Kayla Mak – This contemporary ballet dancer has racked up some impressive accolades including being a finalist at the Youth America Grand Prix, the prestigious ballet competition, and starring as Clara in the Radio City Christmas Spectacular.

– Siudy Flamenco – This renowned Flamenco team has graced many of the world’s biggest stages, such as the Latin Grammy Awards, the L.A. Philharmonic and Walt Disney Concert Hall.

– Poppin John – Well-known and respected across the dance community for his popping animation, he has amassed over 200 million views across his many videos on YouTube.

– The Kings – This upper team has won almost every competition India has to offer, including India’s Got Talent and boasts some of the most sought-after choreographers in Bollywood.

The premiere episode will air on Tuesday, February 26 on NBC at 9 p.m. ET/PT before moving to its regular timeslot on Sundays starting March 3 at 8 p.m. ET/PT.

Check out the Season 3 sneak peek clip below! See the full list of the 54 dance acts as well.

In partnership with preeminent global dance brand World of Dance, the series brings the world’s elite dancers together to compete in epic battles of artistry, precision and athleticism. Solo dancers will compete against duos and crews in an unlimited range of dance, including hip-hop, popping, locking, tap, ballet, break dancing, ballroom and more.

The contestants are handpicked from qualifying events around the nation and thousands of online submissions. The competitors are divided into four divisions: Junior (17 years old and under, 1-4 dancers), Junior Team (17 years old and under, 5-15 dancers), Upper (18 years old and older, 1-4 dancers), Upper Team (18 years old and older, 5-15 dancers). The competition consists of five rounds: Qualifiers, The Duels, The Cut, Divisional Final and the World Final. In the first four rounds, dancers only compete within their division, but in the World Final – the winner from each division will compete against each other for the grand prize.

– Get Down District, Waacking, Rosemead, CA